Worse health and finances when sickness and activity compensation is refused

The findings of the Swedish National Audit Office’s latest audit indicate that the rules for sickness and activity compensation should be changed, so that more people can receive compensation. According to Auditor General Stefan Lundgren, the current rules are far too strict, bearing in mind the negative consequences a refusal has on individuals’ health and finances.

Like the number of people on sick leave, the number of people who are granted sickness and activity compensation (SA), previously called disability pension, has varied considerably over time. One reason for the variations is changes in conditions governing entitlement to SA, which have been tightened over time, making it more difficult to be granted compensation. Another reason is the Social Insurance Agency’s assessments and application of the regulations, not least in the associated sickness benefit system, since sick leave often precedes an application for SA.

A previous audit by the Swedish NAO (RiR 2016:31) found that the Social Insurance Agency’s assessments of the right to sickness benefit 2009–2012 were on average too generous, in so far as many who were granted compensation would have worked instead if their application had been refused. The findings also showed that more refusals would have had on average neither a positive nor a negative impact on the health of those insured.

This audit studies the extent to which the Swedish Social Insurance Agency makes correct assessments in reviewing the right to SA, i.e. the more permanent forms of compensation in the sickness insurance system. Sickness compensation is payable if the working capacity can be regarded as permanently impaired by at least one quarter due to illness or other impairment of physical or mental capacity. Activity compensation is payable if the impairment of working capacity may continue for at least one year, and the person is aged between 19 and 29.

The audit analyses the effects of refusal of SA on the individual’s income, health and use of the sickness insurance system. To ensure comparability between persons granted or refused SA respectively, the audit uses variations in decisions in equivalent cases arising as a consequence of the case officer’s having a margin of discretion in the individual case. The audit refers to borderline cases, i.e. cases that can be regarded as particularly difficult to assess for the case officers and where both a positive or a negative decision would have been possible. 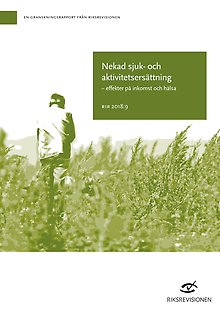