Half of all state higher education institutions have no current plan for provision of premises and thus risk non-compliance with the Government’s requirements or current regulations, shows the Swedish National Audit Office audit.

In the early 1990s the Government decided to implement the “provision of premises reform". This reform aimed to achieve more effective use of resources at central government agencies and more effective management of real property and assets for the State as a whole. The reform was to put the relationship between property owner and tenant on a more arm’s length basis. The central government agencies were also to be responsible for their own provision of premises and thus take comprehensive responsibility for the costs of the organisation.

Higher education institutions’ (HEI) rental costs constitute a significant part of central government rental expenses. In 2016 the HEIs’ costs of premises were SEK 8.5 billion, of which SEK 7.1 billion were rental costs. These extensive financial commitments justify the examination of whether the resources are used effectively. 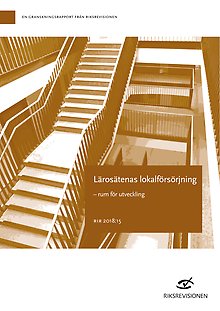