The housing allowance recovery system leads to low-income families with children frequently getting into debt. The Swedish National Audit Office audit shows that the changes recently proposed are a step in the right direction, but that this form of benefit as a whole should be reviewed.

Nevertheless, about one third of the recipients receive demands for repayment of the provisional housing allowance, which is considerably more than was assumed when the rules were introduced in 1997. To reduce the frequency of recovery the Government decided that an effective system for reporting income changes should be created. For example, interest started to be charged on overdue recovery demands.

Since the allowance has a clear family policy purpose, the actions of the Government and the Social Insurance Agency are assessed against this background as well. As housing allowance targets households with a low economic standard, there may also be negative consequences if recovery of housing allowance leads to indebtedness. 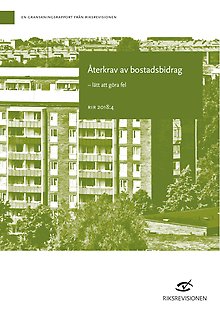