Doctors in primary care have great difficulty in living up to the Social Insurance Agency’s requirements for sickness reporting for mental ill health. The Swedish National Audit Office’s latest audit shows that this risks leading to inconsistent and legally uncertain application of regulations when people who are unwell apply for compensation.

Since 2014 psychiatric diagnoses are most common when sick-listing of both women and men in Sweden. As a rule it is more difficult to determine working capacity for people with mental illness than for people with physical complaints, in part due to a lack of clinical examination findings when meeting the patient. To a great extent there is a lack of knowledge about the optimum period of sick leave for promoting a sustainable return to work for people with psychiatric diagnoses. It has also been highlighted that there are no clear guidelines for assessing mental and social aspects of functional capacity and restricted activity.

The medical certificate is central in the sicklisting process. When sick-listing the doctor has mainly two roles in relation to the patient; the role of attending doctor and the role of medical expert, which includes an insurance medicine remit. In brief this entails making a diagnosis, documentation, providing treatment and medical rehabilitation, while the insurance medicine remit entails describing and assessing working capacity from medical data, including a medical certificate. However, it has been well known for many years that doctors experience the work of sick-listing as problematic. Doctors have difficulties in filling in the medical certificate, which is reflected in the fact that many medical certificates have quality shortcomings. Previous studies have drawn attention to the fact that many doctors, particularly in primary care, feel that the work of sick listing is difficult, sometimes even a work environment problem. The Swedish NAO’s audit confirms these problems.

The Swedish NAO examines reasons for quality shortcomings in medical certificates and the obstacles experienced by doctors when assessing working capacity in sick listing for psychiatric diagnoses. A delimitation is made of doctors in primary care, as doctors at health centres both handle the majority of sick-listing cases in mental ill health and experience working on sick-listing cases as most problematical. 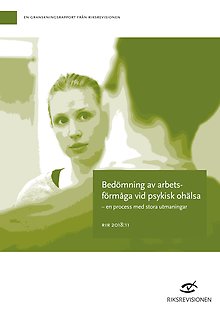 Assessment of working capacity in cases of mental ill health – a process with great challenges (RiR 2018:11)