The Government and responsible authorities have not created sufficient conditions for efficient supply of food and medicinal products in the event of an emergency. The Swedish National Audit Office notes that clearer objectives and division of responsibility are necessary, among other things.

Safeguarding the functioning of society is one of the Riksdag’s three objectives for societal security. It is included both in the civil defence objective and in one of two emergency preparedness objectives. To achieve these objectives action is required by actors throughout society, not least the Government and the agencies that play an important part in creating an overarching system.

The work of strengthening societal security has been going on for a long time in various forms and with different focuses. In recent years, however, there has been criticism of the focus and approach of national emergency preparedness. This includes deficiencies in emergency preparedness due to weaknesses in governance and problems in the interaction between legislation and principles of the system on the one hand and on the other hand the capacity and preparedness of central actors to perform their tasks. Furthermore, the work of security is more pertinent today due to a changed security situation and the renewed focus on civil defence that has accompanied the change.

In view of this, the Swedish National Audit Office has decided to conduct an audit to investigate whether the conditions exist, and the measures are taken, to contribute to robust public services. The audit focused on supply of food and medicinal products, which are two central, citizen-related public services with high relevance for life and health and for the functioning of society. The audit focus is on supply in the event of an emergency, but the question of heightened alert has also been taken into account. The audit is thus not concerned with supply or other circumstances in a normal situation. The audit covered the Government, the National Board of Health and Welfare, the National Food Agency and the Swedish Civil Contingencies Agency 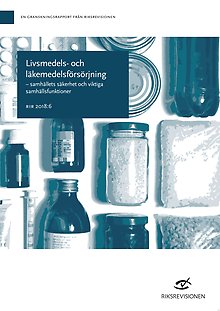