Weak protection against corruption at Swedish embassies and consulates

The protection against corruption and other fraud in migration activities at Sweden’s missions abroad is weak and could be strengthened. This applies in particular to the work of discovering fraud and investigating reported fraud, shows the Swedish NAO’s audit.

Of Sweden’s approximately 100 missions abroad (embassies and consulates), 60 conduct migration activities and process applications for visas and residence permits on grounds of ties to Sweden. In recent years several cases of fraud in these activities have been reported in the media. These include among other things taking bribes when processing residence permit cases and granting visas to Sweden on false grounds.

Both visas and residence permits for Sweden represent a considerable value and there is therefore a risk that missions abroad for example will be subjected to pressure from applicants who want favourable decisions or faster processing. Several missions abroad are located in countries that have extensive corruption and are thus operating in a risk-exposed environment. 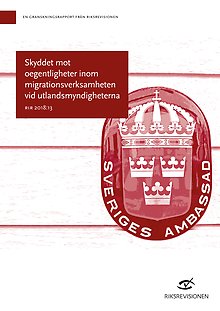 Protection against fraud in migration activities at missions abroad (RiR 2018:13)