Improvement opportunities for the protection of valuable forest

Deficiencies in initiatives, knowledge and the coordination of statistics have rendered the protection of valuable Swedish forest less effective than it otherwise could be. This is one of the conclusions of the audit conducted by the Swedish National Audit Office, which is being published today.

Every year, the state allocates SEK 2-3 billion for the protection and maintenance of valuable nature, which includes forests. The protection of valuable forest land is an important part of the work aimed at achieving the Riksdag’s environmental and outdoor recreation objectives.

The Swedish National Audit Office has assessed whether or not the state’s initiatives have contributed effectively to the achievement of these objectives. The audit’s conclusion is that cost-effectiveness can be improved. For example, both the quality and function of the protected areas can be improved. Furthermore, the reporting of statistics needs to be developed.

– The state has so far primarily focused on achieving area objectives at the national level. Our assessment is that the work, to a higher degree than before, should also focus on the quality and function of the areas, says Auditor General Ingvar Mattson.

In order to improve the quality and function of the protection, there needs to be increased knowledge on the areas requiring protection, the different regional needs of protection and the voluntary set-asides, in order for the agencies to be able to prioritise effectively. Additionally, increased maintenance efforts are needed in protected areas.

Protection of areas with somewhat lower protection values can be cost-effective if the compensation paid out is also lower. However, the audit shows that, to a large extent, there is currently a lack of opportunities for reducing protection costs through the use of alternative forms of protection.

– One example of this not working is the complementary working method for the formal protection of forests, Nya Komet. The way this method is currently constructed does not allow for cost-effectiveness, says Ingvar Mattson.

If continued efforts are to be effective, they need to be planned based on how far we are from the objectives. But then there needs to be more consensus and coordination between all involved parties,” states the Swedish National Audit Office.

– If there is to be transparent and comparable follow-up of the objectives to the Riksdag, there needs to be more consensus about which areas are to be approved for formal protection and voluntary set-asides respectively, as well as increased coordination of statistics, says Linda Sahlén Östman, project manager for the audit.

The Swedish National Audit Office recommends, inter alia, that the Government do the following:

Furthermore, it is recommended that the Swedish Environmental Protection Agency and the Swedish Forest Agency coordinate the reporting and follow-up of the environmental objectives, and also establish common criteria for ascertaining when a conversion from voluntary set-asides to formal protection may be justified.

The Swedish Forest Agency should also more clearly communicate the division of responsibilities between forest owners and the state in order to achieve the objectives. 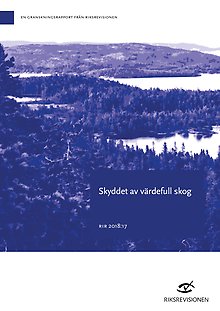