The costs of developing a new signal system for the Swedish railway have almost tripled, and there is a risk of further increases down the line. At the same time, the audit by the Swedish National Audit Office reveals that delays and deficiencies in the planning have entailed extra efforts in the current, outdated signal plant in order to avoid problems for rail traffic prior to the transition.

Sweden has committed to transitioning to the new common EU signal system for rail traffic, ERTMS (European Rail Traffic Management System), by 2030 at the latest. All EU Member States will implement ERTMS to facilitate the cross-border rail transport of passengers and goods.

The Swedish NAO has audited the planning of this implementation by the Government and the Swedish Transport Administration. The implementation costs are estimated at around SEK 30 billion, of which approximately SEK 3 billion is earmarked for developing the Swedish version of ERTMS. Among other things, the audit indicates that the Transport Administration has seriously underestimated the development costs, which have almost tripled since 2010.

In addition, we find that delays only increase the risk of additional costs. The estimates that have been produced are quite simply not sufficiently grounded in solid data, says Auditor General Ingvar Mattson.

The Swedish NAO also notes that much of the planning process has been characterised by flawed investigative logic. From the start, the Transport Administration and Banverket (the former Swedish National Rail Administration) concluded that the system would enable increased railway capacity corresponding to public benefit of almost SEK 26 million.

More recent assessments, however, indicate that this will not be the case and that the benefit of ERTMS for the cross-border rail transports is limited within the foreseeable future. The public benefit consists instead of the current outdated signal system being replaced by a new one, which reduces the risk of disruptions and which is easier to maintain.

– But it is only now, at the end, that the economic analyses have focused on how the implementation of ERTMS can best be synchronised with the replacement of the old system. Consequently, the Transport Administration has not had the conditions to prioritise the right initiatives, says Erik Trollius, project manager for the audit.

The deficiencies in the existing signal plant are becoming critical. The Transport Administration had a plan for phasing out outdated equipment but since ERTMS was to be implemented, this plan was put on hold while waiting for the new system. As the Transport Administration had not planned for a postponed ERTMS implementation, there is now an increased risk that errors in the old signal plant cannot be remedied due to a lack of spare parts and expertise.

– So as not to impact rail traffic, the Transport Administration is now being forced to invest heavily in the old system while waiting for the new system to be ready for implementation. This means that there is a risk of various additional costs and short-term solutions for which the Transport Administration lacks a management strategy, says Erik Trollius, project manager for the audit.

The Swedish NAO also warns that maintenance and repairs of the new system may become unduly expensive as only the original supplier of the ERTMS system can supply many of the spare parts. This is also a problem with the current system, and one which has contributed to the existing lack of spare parts and expertise. 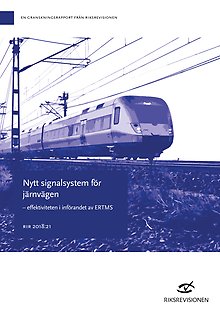 New signal system for the railway – efficiency in the implementation of ERTMS (RiR 2018:21)