Investment savings account: a simple form of saving that has led to billions in forgone tax revenue

The introduction of investment savings accounts has made it easy to save and invest in shares. However, the audit of the Swedish National Audit Office reveals that these accounts may have cost the central government SEK 42 billion in forgone tax revenue.

The investment savings account (ISK) was introduced in 2012 to make it easier for individuals to save and invest in financial instruments such as shares and fund units. These accounts have become very popular and has encouraged more than 2.2 million people to open such accounts.

The Swedish NAO’s audit indicates that investment savings accounts have simplified saving and investing in shares in a number of ways, for example, by making it easier to file tax returns. Saving in funds, however, has not been simplified to the same extent since prior to the reform, it was already easy to declare gains and losses on fund units.

On the other hand, certain aspects of saving in shares have become more complicated. This includes participation in certain new share issues and initial public offerings, as well as companies distributing shares in a subsidiary.

The introduction of the investment savings account has resulted in a more complex tax system. The difficulties that this can entail for the individual saver should not be underestimated, says Auditor General Ingvar Mattson.

Considering the fact that saving in an investment savings account entails more risk, such an account cannot be deemed to be a particularly favourable in terms of taxation, says Anna Brink, project manager for the audit.

In total, we may be seeing forgone tax revenue of SEK 42 billion since 2012. These large amounts are explained by the strong performance of the stock market. If the stock market had not performed as well, the results would be different, says Auditor General Ingvar Mattson.

The Swedish NAO recommends the Government to regularly inform the Riksdag of the impact that investment savings accounts have on tax revenue.

Furthermore, the Government should review the possibilities of simplifying share savings in investment savings accounts in terms of participation in new share issues and initial public offerings, as well as in holdings of shares in subsidiaries that are distributed.

In the event of a tax reform, the following is also recommended: 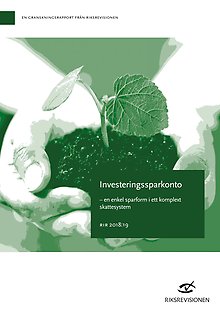