Unclear effects of investment aid for special housing for the elderly

The aid granted to build special housing for the elderly has not been effective. The most recent audit by the Swedish National Audit Office indicates that the problem has now been passed on to a new aid package disbursed since 2016. The new aid does not have a time limit.

The Swedish National Audit Office has audited the investment aid earmarked for special housing for the elderly that existed between 2007 and 2014, and that is the basis for the new aid that has been disbursed since 2016.

The aid was intended to stimulate more places in special housing for the elderly, as well as to improve general geriatric care services. The investment aid was disbursed to developers who would contribute to an increase in the amount of special housing for elderly through construction and renovation. A total of 1.5 billion SEK was disbursed during the time period in question.

In addition, it is not possible to determine how many of the places that were added during the period would also have been built without the investment aid.

The financial challenge for the municipalities was not the actual construction of accommodation for the elderly, but the operation of such facilities. Therefore, there’s a big risk that the aid-financed properties that would have been built anyway, but which were instead built with better financial margins for the developer, says Auditor General Helena Lindberg.

The audit of the Swedish National Audit Office shows that the main reasons for the aid were poorly founded, because few municipalities reported a shortage of places. Moreover, the follow-ups and evaluations of the investment aid as a method by which to solve the housing shortage yielded only uncertain results.

In this context, it is worth pointing out that the new aid, which was introduced in 2016, and which lacks a time limit, has the same basic design. The Government still has not structured the aid in a manner that makes it possible to determine whether it results in an increase in places in special housing, said Helena Lindberg.

In addition to yielding more places in special housing, the investment aid was part of a larger initiative aimed at improving geriatric care in general. However, the Swedish National Audit Office notes that the unilateral structure meant that not all municipalities could take advantage of the aid.

Different municipalities have different challenges when it comes to geriatric care, and the number of places in special housing is just one issue. It is therefore likely to be more effective to provide municipalities with a more general subsidy that can be adapted to the specific needs of each municipality, says Cecilia Dittmer, the project manager for the audit.

The Swedish National Audit Office recommends that the Government consider converting the current aid to a more general subsidy allocated to the municipalities and distributed according to the proportion of older residents in each municipality. 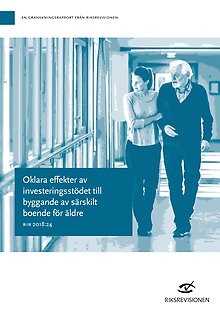 The effects of investment aid on the construction of special housing for the elderly are unclear (RiR 2018:24)