Shortcomings in the municipalities’ annual reports and reporting to Statistics Sweden (SCB) constitute a threat to the reliability of the Annual Municipal Accounts (Räkenskapssammandraget, RS), which is used for designing government fiscal policies. The Swedish National Audit Office recommends a tightening of checks and procedures when the information is collected by SCB.

The RS is the Swedish state's most important source of information on the economic situation and development of the municipalities. The RS serves as the basis for the national accounts, which in turn are a key basis for the Swedish government's fiscal policy.

SCB, which is responsible for developing the RS, has always considered the reliability to be high – but it has not ensured that this is true. The audit of the Swedish National Audit Office now indicates that the reliability of the RS is threatened by shortcomings in the municipalities’ annual reports and by errors in the transmission of data to SCB.

We have seen unexpectedly many errors in the municipalities’ transfer of data from their annual reports to the RS. The problems in this area are greater that we had previously realised, says Helena Lindberg, Auditor General.

Transmission problems and performance adjustments together constitute a threat to the reliability of the Annual Municipal Accounts. This has likely led to negative consequences for the actors that use data from the RS, says Lasse Einarsson, the project manager for the audit.

For example, shortcomings in the reliability of the RS’s income statements and balance sheets may affect the accuracy of the government's fiscal policy and the municipalities’ use of key performance indicators for municipal comparisons. They also make it harder for politicians, journalists and local residents to monitor the real economic development of individual municipalities.

To reduce municipalities’ incentives for performance adjustments, the Municipal Government Act was altered in 2012 so that in times of economic prosperity, the municipalities can set aside funds in so-called local regulatory reserves (“resultatutjämningsreserver,” RUR).

The majority of the municipalities have availed themselves of these reserves, but that hasn’t reduced the incidence of performance adjustments. Local regulatory reserves do not seem to have solved this problem, says Auditor General Helena Lindberg.

In brief, the Swedish National Audit Office recommends that SCB:

Every year, each Swedish municipality downloads a large Excel form from the Statistics Sweden (SCB) website, fills in the details of the current year's incomes and expenses, and sends the file to SCB. This information is known as the Annual Municipal Accounts (“Räkenskapssammandraget,” RS), and constitutes the Swedish state's most important source of information about the economic situation and development of the municipalities.

The income statements and balance sheets in the RS serve as the basis for the national accounts, which in turn are a key basis for the Swedish government's fiscal policy. The data are used in the government's budget proposals, as well as for financial performance indicators and reporting to the EU's statistics agency, Eurostat.

This report is the second of two on the reliability of the Fiscal Summary. The first, The Fiscal Summary as the Basis for Municipal Comparisons – are the expense calculations reliable? (RiR 2018:7), was published in March 2018. 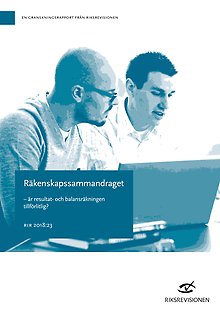 The Annual Municipal Accounts – is the income statement and the balance sheet reliable? (RiR 2018:23)