Certain deficiencies in the state's sale of Nordea

The sale of the state's Nordea shares was largely handled in a commercial manner, as per the requirements determined by the Riksdag. However, the Swedish National Audit Office has identified deficiencies in the planning, implementation and reporting processes.

On three separate occasions in 2011 and 2013, the Swedish state sold its holdings of shares in Nordea Bank AB. The sell-off was implemented pursuant to a parliamentary decision, and was to be conducted in a commercial manner that maximised revenues. In total, the state received 60 billion SEK for its Nordea shares.

The audit of the Swedish National Audit Office indicates that in essence, the sales were planned and conducted in a commercial manner, and in accordance with the requirements of both the Riksdag and the Budget Act. For example, the Government Offices of Sweden was careful to initiate sales when demand for the shares was expected to be high.

However, certain deficiencies have been identified. These include the following:

Our assessment is that as a whole, the deficiencies that emerge in the report, such as the lack of a clear target for the discount, worsened the conditions for really good sales performance, says Peter Jörgensen, the project manager for the audit.

The deficiencies related to planning, implementation and reporting make it difficult to draw lessons for any future sales of the remaining state-owned listed companies, notes Auditor General Helena Lindberg.

Prior to any future sale of the remaining state-owned joint stock companies – TeliaSonera AB and SAS AB – the Swedish National Audit Office recommends that the Government develop its reporting to the Riksdag on how sales have been prepared and implemented. 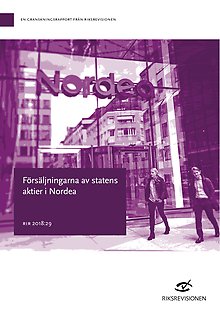