The Swedish National Audit Office’s new audit report shows that the extended opportunities to choose an upper secondary school have had small but positive effects on the future incomes and level of education of pupils. The changes have been most significant for children of parents with a low level of education.

According to the OECD’s surveys, study results and equivalence in the Swedish school system have deteriorated over time. It is believed that part of the explanation has been the increasing level of housing segregation, although the freedom to choose schools has also been cited as a cause.

The Swedish National Audit Office has therefore examined the effects of the extended choices for upper secondary school on income, unemployment and higher education studies ten years after completion of upper secondary education. The audit covers pupils in the county of Stockholm and the municipalities of Gothenburg, Malmö, Vasteras and Uppsala – where the pupils in the municipalities of Stockholm, Malmö and Goteborg were given an early opportunity to choose an upper secondary school.

The results show that the extended choices have had small but positive effects on pupils’ income, which increased by two per cent. But the audit was not able to discern any effect on future unemployment.

Children of parents with a low level of education, who do not have upper secondary or higher education, are the group that benefited the most. Apart from the effects on income, there was also an increase in the proportion of these pupils who eventually gained a higher education qualification.

“Among the children of parents with a low level of education who were included in the audit, we see a clear increase in the proportion of those who have taken a college or university degree ten years after upper secondary school: from 35 to 42 per cent," says national auditor Helena Lindberg.

The audit reveals differences between pupils with foreign background, and pupils born in Sweden with Swedish born parents. For the former group, the opportunity to choose an upper secondary school did not have any confirmed effects on income or higher education.

“This emphasises the importance of efforts to make sure that all schools maintain a high level of quality and that all pupils receive the support and information they need to be able to make the best possible choices based on their conditions,” says Helena Lindberg.

The audit covered pupils in the municipalities of Stockholm, Gothenburg and Malmö, all of which are located in metropolitan regions with good opportunities to choose upper secondary education and schools.

“The effects revealed by the audit are therefore probably higher than for the country as a whole, and in particular compared with municipalities in sparsely populated areas,” says Krister Sund, project manager for the audit. 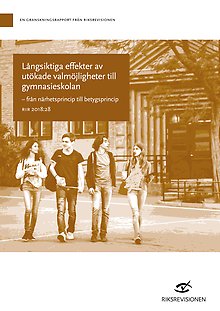