Although the Swedish Transport Administration is supposed to review alternative measures for renovations and new construction, this is only done in half of the infrastructure projects. The Swedish National Audit Office (Swedish NAO) is now recommending the Government to clarify what applies.

Since 1997, the planning of all infrastructure projects is to build on the so-called four-step principle, which in simple terms means that the Swedish Transport Administration is to investigate if less expensive and less extensive measures can meet the needs before renovations and new construction are approved.

“Reviewing the less expensive measures first to see if they can meet the needs is the exception to the rule. The step-1 solutions are rather seen as complements to more expensive measures,” says Ingemar Delveborn, Project Manager for the Swedish NAO’s audit.

The main reason for this is deemed to be that the Swedish Transport Administration has no mandate to implement many of the step-1 measures. This primarily concerns measures to reduce traffic volumes or the demand for transports, where for example fees, taxes, subsidies and overall urban planning may be necessary measures.

“The Swedish Transport Administration needs to analyse and propose measures from a system perspective. Since the Administration does not have all of the necessary tools at its disposal to change demand, clearer support by the Government is also needed,” says Auditor General Helena Lindberg.

The audit also shows that the four-step principle is not used across multiple modes of transport to the extent that the Swedish Parliament has decided, and that the quality of the measure selection studies that form the basis of the planning of the transport infrastructure needs to be improved.

The Swedish NAO recommends the Government to clarify for the Swedish Transport Administration how the four-step principle should be used, and what it means for step-1 alternatives to be reviewed before step-2 alternatives, etc.

The four-step principle was introduced in 1997, and means that possible improvements to the transport system shall be reviewed in steps. The idea is to review less expensive measures first before investments are made in new transport infrastructure. The principle is to be used for all modes of transport regardless of whether an investment is intended for roads, railways, aviation or shipping.

Here, it is investigated if various kinds of efforts can be used to solve a certain identified deficiency by reduced transport demand or transferring travel and transports to more efficient modes of transport.

Efforts in the form of planning and impact to use existing infrastructure more efficiently, such as bus lanes on heavily trafficked streets.

New investments or large renovation measures, such as the expansion of a road to motorway standard and expansion to double-track on railways. 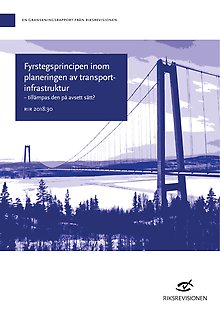 The four-step principle in transport infrastructure planning – is it being applied as intended? (RiR 2018:30)