Long-term social planning and policy decisions are often based on future scenarios produced by government agencies. The Swedish National Audit Office’s audit shows that there are significant differences between the government agencies’ scenarios, and that this can have consequences for the weighing and prioritisation of various government initiatives.

The central government requires long-term planning within a number of important areas, which are characterised by large investments and long planning horizons. The data used for decision-making consists of various types of long-term calculations and scenarios produced by government agencies.

The Swedish National Audit Office has compared the scenario work of competent authorities within the areas of transport, housing, energy and environment. The audit shows that there are often significant differences between these scenarios, even when they describe partly overlapping areas. The differences relate to both results and the way they were produced.

“Different agencies make different choices in terms of calculation method, input data and assumptions. A lack of conformity, or consistency, impairs transparency and comparability. Our conclusion is that central governance and the agencies’ scenario work need to be improved,” says Auditor General Helena Lindberg.

The audit also shows that competent authorities have not sufficiently coordinated their work on future scenarios.

“Since these scenarios are used to make decisions with a significant impact on state finances, there is a risk of needlessly complicating the weighing and prioritising different objectives and government initiatives,” says Cecilia Kellberg, project manager for the audit.

Lack of transparency also makes it more difficult for the recipients to assess the quality and credibility of the calculations. In addition, the uncertainty is not clearly pointed out to the Riksdag, and a certain work is duplicated. There are several examples of parallel scenarios being produced by different government agencies within the same field.

The Swedish National Audit Office recommends the Government to clarify: 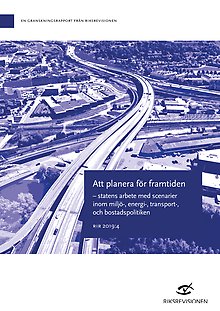 Planning for the future – the central government’s work with scenarios within environmental, energy, transport and housing policy (RiR 2019:4)