Klimatklivet: A comprehensive environmental initiative with deficiencies in efficiency and reporting

Klimatklivet is a comprehensive environmental initiative that was introduced 2015. The audit by the Swedish National Audit Office reveals that the aid is not cost-effective, and that the government's reporting to the Riksdag has been too positive.

Klimatklivet provides financial support for local investments. The aim is to contribute to achieving the environmental quality goal of limited climate impact. In 2018, the aid amounted to SEK 1.5 billion, or 14 per cent of the Swedish state's total expenditure for environmental policy.

The audit of the Swedish National Audit Office reveals that overall, the responsible authorities have implemented Klimatklivet in a good way, but that the start-up phase was short and characterised by several difficulties. Among other things, the models for grant assessment were developed in parallel with the start of the processing of grants, and there is therefore a risk that incorrect decisions have been made.

The audit also indicates shortcomings in cost-effectiveness in terms of the contributions of Klimatklivet to reducing emissions of greenhouse gasses.

“The costs per kilo of reduced greenhouse gas emissions have been high in Klimatklivet. Greater impact could have been achieved if the aid had been designed differently,” says Auditor General Helena Lindberg.

The Swedish National Audit Office also notes that in its reporting to the Riksdag, the government has chosen to provide a unilaterally positive picture of the initiative and its effects, even though the authorities have continuously painted a more nuanced picture.

“The government has not provided the Riksdag with an overall socio-economic assessment of the impact of the aid. The Riksdag should have had access to this information when it decided on the initiative,” says Helena Lindberg.

The Swedish National Audit Office advises that when introducing any new aid, the government should base its approach on the problem that is to be solved and that in areas in which other instruments are lacking or weak, it should limit the scope of its efforts to standard measures.

The government should also ensure enough time frames so that the authorities can work out a functional work process before a new system such as Klimatklivet is initiated. Furthermore, the Swedish National Audit Office recommends that work processes and systems built up within the context of Klimatklivet should be utilised. 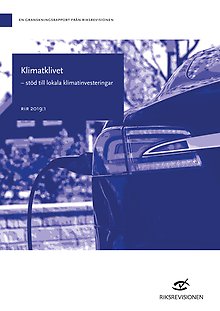