The regional export centre initiative, implemented nationally, is intended to improve the export capabilities of small and medium-sized companies. The National Audit Office’s audit shows that it could have been implemented more efficiently and that the results should be followed up on and accounted for more clearly to the Riksdag.

Establishing regional export centres is one of the biggest measures in the Government’s export strategy, in terms of involved actors and initiatives.

The purpose is to give a clear starting point for companies looking for guidance and support from public actors, in order to promote export opportunities. The work started in 2016 with pilot centres in six counties, and was subsequently expanded to include the whole country.

The National Audit Office’s audit shows that the initiative has great potential to produce good results, as the services on offer are in demand, but that it should have been implemented somewhat differently in order to be as effective as possible. For example, the experiences of previous, similar initiatives should have been taken into greater consideration.

“Avoiding previous mistakes and making adjustments is fundamental to an effective implementation and efficient use of tax funds. This was lacking when introducing regional export centres,” says Auditor General Stefan Lundgren.

The Government and the Agency for Economic and Regional Growth have also failed to ensure that the initiative can be evaluated in a structured way, which is important for managing and developing the initiative and to report the results to the Riksdag.

There are also questions regarding the sustainability of the initiative, and the links to other parts of the Government’s export strategy. The reporting to the Riksdag also has major issues.

“In their accounts, the Government and the Agency for Economic and Regional Growth have failed to meet the requirements regarding systematic work and focus on results. The information provided is too basic and anecdotal to be relevant,” say Dimitrios Ioannidis, project manager for the audit. 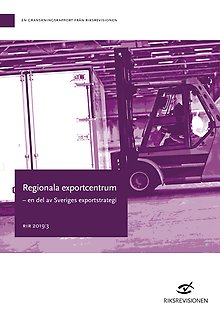