The Swedish Schools Inspectorate allocates considerable resources to identifying problems in schooling, but often closes cases without ensuring that the deficiencies are corrected. The National Audit Office also identified shortcomings in transparency, urgency and equivalence in relation to follow-up of supervisory decisions.

The Swedish Schools Inspectorate must, through its supervision, examine whether the schools comply with laws, rules, curricula and other regulations. The aim is to contribute to the right of all pupils to a good education in a safe environment.

The supervisory work includes identifying shortcomings, ordering the schools to rectify them and following up that this has been done. The National Audit Office’s review of the follow-up shows that this work does not always function as intended.

– The Swedish Schools Inspectorate closes many cases without checking whether the shortcomings have actually been remedied. This applies especially where schools have had safety issues and a turbulent study environment. In these cases, less than half of the matters are followed up with return visits to the school, says Sofia Sandgren Massih, project manager for the review.

Cases can be closed without revisiting the schools, provided that the schools have described in writing actions that have been taken, how they have been reviewed and the outcome of this. However, the Swedish Schools Inspectorate is often satisfied with the education provider stating that the problems are fixed, without any documentation regarding the results. Overall, this means that the follow-up does not ensure that the shortcomings are rectified.

– Since considerable efforts have been made to identify shortcomings, it is not an effective use of state resources to close a case without ensuring that the measures were effective, says Auditor General Helena Lindberg.

The National Audit Office also notes that supervisory decisions are not always followed up quickly enough. The authority's guideline is that decisions should be taken within three months from the date of the report from the principal, but in about a third of cases where statistics are available, there is a lack of compliance with the guideline.

In addition, there are unreasonably large differences between the authority’s five regional departments’ work with follow-up matters. This applies, for example, to how often follow-up visits are made, the duration of the follow-up and to what extent decisions to close matters are explained. 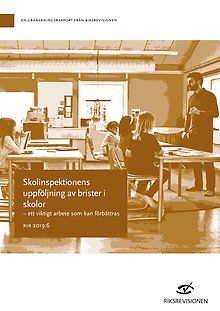 The Swedish Schools Inspectorate’s follow-up of shortcomings in schools – an important work that can be improved (RiR 2019:6)