The premium pension system is not efficient, something that will have a negative impact on future pensions. An audit report from the Swedish National Audit Office indicates that the requirement for pension fund managers to systematically report all costs should be tightened up.

The premium pension system is an important and growing part of the public pension system, which overall has delivered a good growth of Swedish pension capital.

However, in recent years a number of problems have been noted. The Swedish National Audit Office has therefore investigated whether the pension system safeguards the interests of pension savers and - given the savers’ choice of funds – maximises pension outcomes for future pensioners.

The audit report shows that the management of pension funds performed by private fund managers lacks in effiency. One indication is that the total premium pension capital would have been four per cent greater today if it instead had been managed in so-called passive index funds - a form of fund management that can be performed at a fairly low cost and still have relatively good returns.

Although premieum pension savers can adjust their fund holdings on a daily basis without cost, they are quite passive. The report states that this has also had a negative effect on the performance of the system. The audit report shows that the great majority of savers do not react and switch fund when a fund increases its fee, implying strong inertia in premium pension capital investment. This is a problem because, by construction, it is the pension saver’s active choices that are supposed to weed out fund managers with lower performance on the premium pension fund market.

“The system assumes that savers will be active, but these mechanisms do not appear to work as intended. Overall, this means that savers who have chosen private funds on the market run a long-term risk of paying higher fees in relation to fund performance,” says Auditor General Stefan Lundgren.

“This is a concern, because fund of funds solutions have increased and now comprise about a quarter of the savings capital that is managed by private funds,” says Daniel Hallberg, project manager of the audit.

The Swedish National Audit Office concludes that the supervisory authorities need better tools for ensuring that the premium pension administration is cost effective and in the best interests of savers.

The Swedish National Audit Office recommends that the Swedish Pensions Agency develops tools for the ongoing assessment of cost effectiveness in pensions administration in the premium pension system.

The government is recommended to tighten up the requirement for all fund companies that wish to act in the system to report all costs, and to instruct the Swedish Pensions Agency to perform regular assessments of cost effectiveness in the premium pension system. 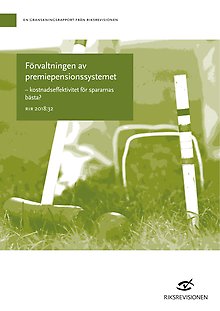 Management of the premium pension system – Cost effectiveness in the best interests of savers (RiR 2018:32)