The Government’s management of the cultural institutions has become clearer and more long-term, according to the latest audit by the Swedish National Audit Office. However, this management is not adapted to different forms of operations. This means that state-owned companies and foundations are managed as if they were government agencies.

The cultural sector differs from other policy areas. For example, the sector consists of many small institutions organised in different ways – as government agencies, societies, foundations and state-owned companies.

The sector is also characterised by the arm’s length principle, which means that politicians must keep to creating good conditions, while leaving the responsibility for content and quality to the operations.

This entails special requirements for central governance. The audit of the Swedish National Audit Office (Swedish NAO) shows that the governance is moving in a positive direction over time and that the institutions concerned are content.

“The Government implements clear, result-oriented, strategic and long-term management. The institutions also state that there is no risk of informal contacts leading to undue influence,” says Auditor General Helena Lindberg.

However, the Swedish NAO notes that the Government can do more to adapt its management to the different conditions that apply to different forms of operation.

“Government agencies, foundations and companies are all being managed as agencies. This means that there is a risk of ambiguity in terms of the rules that apply to each of these operational forms and the conditions for use of public funding decided by the Government,” says Helena Lindberg.

Owner influence in a company is exercised primarily through the shareholders’ meeting. The most important policy document is the articles of association, which can be supplemented through owner instructions.

In the cultural sector, the Government has chosen to exercise owner influence by deciding on guidelines for granted funding, much like how government agencies are managed. This applies, for example, to the Royal Opera and the Royal Dramatic Theatre, which receive funding to carry out certain societal functions.

“But the Government’s guidelines have no validity in company law, where they are trumped by the Swedish Companies Act. If the boards of these companies need to make priorities, they will comply with the vote of the shareholders’ meeting and the articles of association, which means that the activities risk going in a different direction than the one decided by the Government,” says Gunilla Lundquist, Audit Project Manager.

The Government uses the same steering instruments for cultural sector foundations. In these cases, this also risks leading to conflicting goals, if the Government’s guidelines do not correspond to the statutes of the foundation.

The Swedish NAO recommends the Government to consider producing owner instructions for state-owned companies rather than setting guidelines.

The Government should also ensure that the guidelines or conditions for public funding to foundations do not contradict the statutes of the foundations. 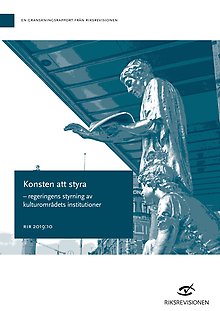 The Art of Governing – the Government’s management of cultural sector institutions (RiR 2019:10)