Weak governing of the work against organised crime

For several years, twelve government authorities have invested considerable resources into fighting organised crime. An audit by the Swedish National Audit Office (NAO) has shown that government steering has been unclear and uncoordinated. Shortcomings in follow-ups also mean the impact of the efforts cannot be evaluated.

Since 2008, twelve authorities* have conducted joint efforts on behalf of the Swedish Government to combat organised crime. Operations are comprehensive. Between 2013 and 2018, the authorities invested over 2.8 million working hours and at least SEK 1.4 billion into this joint task.

The Swedish National Audit Office has examined how the work is governed. The audit shows that Government steering has been neither clear nor coordinated, and consequently the participating authorities have been left to determine the targets individually.

According to the Government, operations are financed within the framework for each authority’s administrative funding, however the authorities have not received any guidance regarding the scope of the operations. Five authorities have applied for extra funding, but have been rejected; four authorities state that funding is problematic.

“The Government has not sufficiently monitored the operations to be able to ensure they have met their objectives. This is remarkable for such comprehensive and important operations,” says national auditor Stefan Lundgren.

The Swedish NAO also notes that shortcomings in monitoring and reporting make it difficult for the authorities to evaluate the effects of the joint work against organised crime.

“The work has been going on for ten years. In spite of this, there is only limited information on how many resources have been used and the extent to which targets have been met. An operation that employs hundreds of people each year at a cost of hundreds of million Swedish krona should be monitored better than at present,” says Susanna Honnér, project manager of this audit.

The Swedish NAO recommends that the Government ensures that the steering of the authority-wide work is regularly coordinated, and that the use of resources and results are followed. The recommendation is that the authorities create better conditions for assessing efficiency and meeting targets.

* The following Swedish authorities are involved in the work against organised crime: The Public Employment Service (since 2014), The Economic Crime Authority, Försäkringskassan (since 2010), The Prison and Probation Service, The Enforcement Authority, The Coast Guard, Migration Agency (since 2013), Police Authority, Tax Agency, Security Service, Customs and The Prosecution Authority. 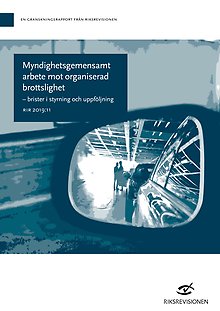