State-owned Almi is to promote having more women running businesses in Sweden. However, for several years, Almi’s reporting of its commission has been misleading, thereby giving an overly positive image. The Swedish National Audit Office’s audit also indicates deficiencies in the central governance.

Despite this, it is much more common for men than women to have a business, which is believed to be linked, among other things, to gender equality issues in society and to the view of women and men as entrepreneurs.

The state-owned company Almi Företagspartner AB (Almi) is commissioned to promote Swedish enterprise, for example by giving loans to companies that struggle to obtain loans from the regular credit institutions.

One of Almi’s tasks is to focus especially on women. The Swedish National Audit Office has examined whether Almi’s work contributes to attaining the gender equality policy goal regarding economic equality. The audit also includes the central governance of Almi.

“Almi has not been transparent about counting companies led by mixed teams as being run by women. Almi has thus given the impression of a better outcome than what has actually been the case,” says Emilia Johansson, Project Manager for the audit.

The audit also indicates weaknesses in the central governance of Almi. The Government has not requested better follow-up or guided Almi in terms of how to carry out the mission regarding women who start or run businesses. The goals of the gender equality policy have not been reflected in the Government’s owner instructions to Almi.

“The general impression is that the Government should have assumed greater responsibility and given Almi clearer guidance on what the commission entails,” says Auditor General Helena Lindberg.

The Swedish National Audit Office recommends that the Government consider reformulating Almi’s owner instructions, so that they correspond better to the goals of the gender equality policy. Almi is recommended to improve its reporting of the proportion of women and men who receive loans. 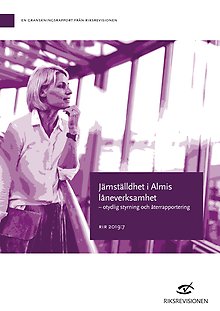