Risk of undermining trust when purchasing from related parties

Government agencies will sometimes make purchases from companies with ties to the agency’s employees or their relatives – at times with very large sums involved. These purchases can be completely legitimate, but they can also entail a risk of corruption and other irregularities. The Swedish National Audit Office (NAO) has examined the scope and management of related-party transactions.

In 2016, the public sector purchased services and products to a value of approximately SEK 683 billion, which corresponds to one sixth of the Swedish GDP.

Purchasing is an area with an increased risk of corruption and other irregularities. For this reason, the Swedish NAO has audited the extent to which government agencies make purchases from companies with ties to agency employees or their relatives, i.e. related-party transactions.

The audit shows that related-party transactions are relatively rare, but that they occur at all the audited agencies. In 2016, more than three per cent of the employees of the Police Authority and the Transport Administration had ties to the agency’s suppliers. At the other three agencies, the figure was slightly lower.

The Swedish NAO makes the assessment that the majority of these transactions entail a small risk, but in some hundred cases, there is a potential risk of undermining trust. However, the Swedish NAO has not had the opportunity to review these purchases in more detail and is therefore unable to determine whether any actual irregularities have taken place in conjunction with some of these cases.

“Purchases that could potentially undermine trust have been found in all the audited agencies, and we have no indication that the situation would be different at other agencies. Our conclusion is that all government agencies need to be capable of managing this issue in a way that minimises the risk of irregularities,” says Auditor General Helena Lindberg.

It is not possible to completely avoid related-party transactions. Free enterprise and the principle of competition neutrality for example make it impossible for government agencies to prohibit their employees from investing in companies or to exclude the companies of their relatives from procurements.

“One challenge is that there is no clear pattern in the related-party transactions: They occur in different parts of the agencies, the companies involved are operating in a large variety of industries and the amounts vary greatly. This means that the agencies need functional protection throughout their operations,” says Marianne Danielsson, project manager for the audit.

The audited agencies are generally assessed as having good procedures in place and pursuing ambitious development efforts, however, this does not always impact on all parts of the operation. The Swedish NAO is therefore recommending reinforcement of these efforts.

“It is a matter, for example, of always including the prevalence of irregularities in conjunction with purchases in the agency’s risk analysis, and regularly discussing the problems associated with secondary employment. In addition, potential conflicts of interest need to be discussed and managed in procurements,” says Marianne Danielsson. 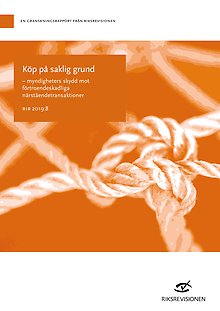