To counteract unfair gender pay differences, all employers must carry out equal pay surveys. A Swedish National Audit Office audit shows that the legislative requirements can only affect pay differences to a minor extent, particularly among small employers.

One central government instrument for counteracting unfair pay differences is equal pay surveys, which all employers are required to carry out. Companies with at least ten employees must also document the surveys and the measures that are planned as a result.

The Swedish NAO has examined how effective equal pay surveys are in counteracting unfair pay differences. The audit findings include the following:

“The requirements regarding documentation of equal pay surveys did not have any measurable effect on pay differences in the companies studied. The audit also shows that parts of the equal pay survey may be complicated to implement. The Swedish NAO’s assessment is therefore that the legislation needs to be reviewed,” says Auditor General Stefan Lundgren.

“Equal pay surveys are intended to counteract unfair pay differences between men and women who work for the same employer. At present there are no overall statistics on pay differences at employer level. These statistics need to be compiled to enable the Government and public authorities to assess how central government measures in this field can be developed,” says Christer Gerdes, project leader for the audit.

Note: The pay differences referred to are differences in salary corresponding to full-time employment between men and women. Earned income refers to total work-related income during the year, taking into account the employee’s actual working hours. 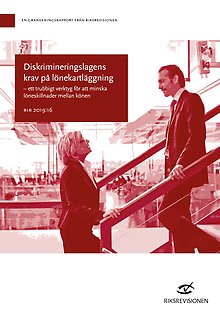