Sanctions against municipalities have contributed to improved legal security

Municipalities that do not enforce decisions on assistance must report to central government and risk paying a penalty charge. The Swedish National Audit Office’s audit of the sanctions shows that they have contributed to improved legal security. However, the system has weaknesses and can be further developed.

When a municipality’s social services decide on assistance to an individual or household, by law the decision must be enforced immediately. The same applies when a court makes a decision in an assistance case that has been appealed.

This does not always happen. In the years 2010–2018 more than 90,000 cases were reported where municipal decisions on assistance were not enforced within three months. With the exception of some isolated years, the number has even increased continually since 2010.

Since 2006 it is required that municipalities that do not enforce decisions favourable to the individual within a reasonable period must report this to the Health and Social Care Inspectorate, among others. The Inspectorate can also apply for an administrative court order to a municipality to pay a penalty charge.

The Swedish NAO has audited the regulatory framework. The overall assessment is that the sanctions in combination have helped to improve legal security for individuals who have been granted assistance.

“There is now a higher awareness among municipalities about what applies. Virtually all municipalities now report non-compliance with the rules. There are also instances of municipalities that receive a large number of penalty charges starting internal audits,” says Anneli Josefsson, project leader for the audit.

However, there are some weaknesses in the system. For example, non-enforced judgments are not included in the municipalities’ reporting obligation, when the individual has appealed a decision to a court and the court has found against the municipality.

“In these cases there is a risk of the individual’s legal security being disregarded. Consequently, we propose that the Government should consider extending the reporting obligation to also cover them,” says Auditor General Helena Lindberg.

In addition, the system is time consuming both for the municipalities and for the Health and Social Care Inspectorate. For example, the processing of penalty charges often continues for a long time after the decision in question has been enforced and the case is closed. Most decisions that are reported are also enforced without any special charge being imposed.

The Swedish NAO’s recommendations to the Health and Social Care Inspectorate include continuing the work of simplifying the processing of non-enforced decisions and annually following up the municipalities that submit few or no reports. 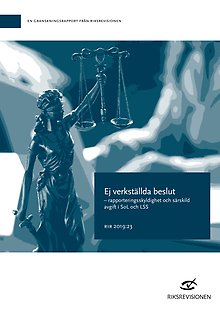 Non-enforced decisions – reporting obligation and special charge in the Social Services Act and the Act concerning Support and Service for Persons with Certain Functional Impairments (RiR 2019:23)