The final cost of operation and basic maintenance of the national road network is on average more than 40 per cent higher than initially procured. The Swedish NAO’s audit also shows that speculative pricing may be one of the causes.

The Swedish Transport Administration annually procures operation and basic maintenance of the national road network for approximately SEK 3.5 billion. Snow clearing and other winter-related measures represent just over half of the costs.

“The audit was performed after indications of cost increases – but we had not expected it to be a matter of such large sums of money,” says Auditor General Helena Lindberg.

This makes the Transport Administration’s procurement procedures sensitive to what is known as unbalanced bidding, which means that contractors speculate as to whether the need for certain types of works will increase or decrease compared with the procurement specifications.

The supplier may then offer a very low price for certain measures to win the contract and then make the profit on additional orders which were not regulated at the time of procurement and on measures which are highly priced.

“It is not forbidden to do so, but it increases the risk that the State will not receive as much maintenance as possible for the money,” says Erik Trollius, project leader of the audit.

Other audit findings show the following:

The Swedish NAO recommends that the Government instruct the Transport Administration to analyse the scope and consequences of unbalanced bidding in basic road maintenance contracts.

It is recommended that the Transport Administration develop a new process for systematic quality assurance of procurement specifications and that it improve its documentation of the works carried out so that future procurement can be based on better evidence that helps reduce cost overruns.

“The best way to reduce the risk of cost increases is to specify as accurately as possible what is to be included in the contracts. That will reduce the need for supplementary orders and reduce the scope for speculative pricing,” says Erik Trollius. 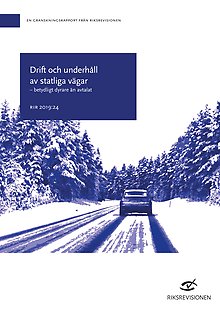