Failure of renovation initiative in areas with socio-economic challenges

In 2016, the Swedish Government earmarked SEK 800 million a year up to 2019 for renovation and energy efficiency measures for housing in areas with socio-economic challenges. However, only a fraction of the money was used, and the initiative contributed only marginally to the political objectives.

The Swedish National Audit Office (Swedish NAO) notes that deficiencies in the design of the support were partly due to the fact that the Government had not produced adequate analyses as basis for decision and that indications of problems were not taken into account.

“When the Government formulates a support initiative, it is important that it is based on properly conducted impact assessments of the expected effects. That was not the case here and unfortunately it is a recurring feature of our audits,” says Auditor General Helena Lindberg.

The initiative was supposed to contribute to both energy and housing policies, while protecting tenants from large rent increases. The Swedish NAO’s audit shows that the support had only limited potential to affect the pace of renovation and energy efficiency. The rent rebate part of the support has a dampening effect on rent increases but does not prevent large increases in the case of extensive renovation.

“In this case, the Government’s aim that the support would solve several different problems at the same time meant that it could only contribute marginally to solving any of the problems,” says Linda Sahlén Östman, project leader for the audit.

“If proper impact assessments had been made before the initiative was launched, the low level of interest from property owners could have been predicted and the design of the support could have been more fit for purpose,” says Helena Lindberg.

The financial support was discontinued in connection with the Riksdag’s budget vote in 2019, at the same time as the final stage of the Swedish NAO’s audit.

Several of the deficiencies identified by the Swedish NAO, such as the absence of impact assessments, have also been previously noted for a number of other government initiatives and reforms – which is also highlighted in the Annual Report of the Swedish Auditors General for 2019.

If the Government is considering implementing similar support in the future, the Swedish NAO therefore recommends that the Government, among other things, designs the support on the basis of an analysis of the problems it will address, an impact assessment of possible effects and simpler application and follow-up processes. 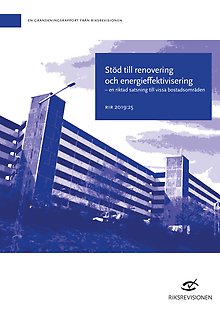