Every year the Swedish Competition Authority receives about a thousand tip-offs about cartels and other unfair market practices. The Swedish NAO’s audit shows that the Authority lacks effective tools for prioritising between different measures, and that the internal control has deficiencies.

A large part of the supervisory activities is based on tip-offs about unlawful collusion, such as cartels, and other violations of competition and procurement legislation. Every year the Authority receives about a thousand such tip-offs, and it must effectively prioritise what is most important to investigate further.

An important instrument for this is the Competition Authority’s prioritisation policy, which specifies the factors to be taken into consideration in determining priorities.

The Swedish NAO’s audit shows that only as an exception is the policy used when the Authority is investigating tip-offs received, and that consequently it only has limited practical significance. It is often other factors that determine the measures taken, such as the state of the Authority’s resources.

Nor is the policy used in ongoing in-depth investigations, which may be highly resource-intensive, for decisions on taking action or discontinuing the investigation.

“The audit indicates that the Swedish Competition Authority could use its resources better. Ineffective supervision may lead to poorer competition with higher prices and consequences for the economy. In addition, the risk of incorrect public procurement processes increases,” says Auditor General Helena Lindberg.

The deficiencies are greater in supervision of competition than in supervision of procurement. The problems are exacerbated by the weakness of the Competition Authority’s internal control, which should be able to identify these problems. The Swedish NAO considers that this also explains why investigation periods are long in some cases.

“The deficiencies mean that the supervision is not as systematic and effective as it could be. This increases the risk of the Competition Authority devoting resources to the wrong cases, or making different assessments in similar cases,” says Jesper Fagerberg, project leader for the audit.

The Swedish NAO recommends that the Competition Authority improves its internal control in the Authority’s supervisory activities and that it evaluates whether the current distribution of resources between competition and procurement supervision is fit for purpose.

In this context the Swedish Competition Authority should also review the current distribution of roles between the investigation department and the legal department, consider introducing compulsory time limits in all investigations and formalise feedback to the prioritisation policy. 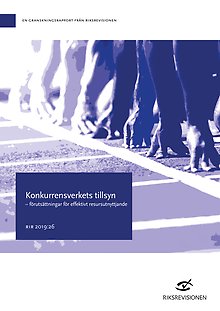 The Swedish Competition Authority’s supervision – conditions for effective use of resources (RiR 2019:26)