The municipal financial equalisation system is not designed so that municipalities can provide their populations with an equivalent service level – the Swedish National Audit Office’s audit shows a need to increase the amounts redistributed between Sweden’s municipalities.

The purpose of the municipal financial equalisation system is for all municipalities to have equivalent financial conditions, despite large differences in tax base, demographics and geography.

The Swedish Riksdag has resolved that Sweden must have an equalisation system, and what purpose it will fulfil. The Swedish National Audit Office (Swedish NAO) has examined whether the system works in compliance with the Riksdag’s decision.

Among other things, the audit reveals that the system does not fully compensate for all cost differences due to varying demographics or geographical conditions – although it is intended to do so.

In 2017, cost differences were equalised by a net amount of SEK 7.2 billion. If the system had worked as the Riksdag intended, the sum should instead have been SEK 10.9 billion.

“Municipal tax rates vary significantly, from SEK 29.18 in Österåker to SEK 35.15 in Dorotea. The Swedish NAO’s assessment is that this is to a large extent because the cost equalisation system does not work as intended,” says Auditor General Helena Lindberg.

The Swedish NAO notes that the Government recently submitted a bill proposing that the cost equalisation system be developed in the same direction as recommended by the Swedish NAO. The Riksdag is processing this bill at present.

If the Riksdag votes in favour of the Government's proposal, redistribution will increase to SEK 9.3 billion in 2020. The Swedish NAO’s calculations show that this is insufficient to address the identified shortcomings, since costs are still systematically underestimated in municipalities covering a large area, with few inhabitants and small urban areas.

“In order for the system to function in accordance with the Riksdag’s intentions, redistribution needs to increase more than the Government is proposing. To do this, better reference data needs to be produced showing the costs of municipal services in areas with more scattered population centres,” says Ulf Andersson, project leader for the audit.

Footnote: The Swedish NAO has examined the financial equalisation system for municipalities, but not the corresponding system for county councils and regions. 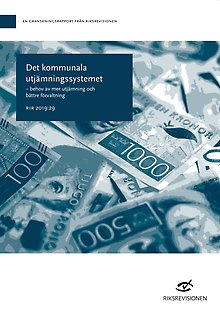