Central government work to prevent nuclear accidents has some shortcomings. Nor is preparedness to deal with the consequences of an accident adequate, according to the Swedish National Audit Office’s audit of nuclear safety and security work.

The Swedish NAO has audited how the Government and the responsible agencies work on nuclear safety and security.

The Swedish NAO’s overall assessment is that central government nuclear safety and security work is not entirely satisfactory. The work is mainly carried out expediently, but there are essential elements that need to be developed.

“We see shortcomings in both preventive work and preparedness for a possible accident. This is a matter of deficiencies in supervision and unclear roles,” says Auditor General Stefan Lundgren.

The Swedish NAO also notes that there is no national strategy for remediation after an accident, that there is a lack of clarity between the audited agencies on when remediation should be carried out and that the agencies responsible have only held one remediation exercise in the last five years.

“Already in 2007 the Swedish NAO found shortcomings related to remediation. The current audit shows that there are still shortcomings that jeopardise the effective management of the long-term consequences of a nuclear accident,” says Sascha Sohlman, project leader for the audit.

The Government has the overall responsibility for steering the agencies involved. The Swedish NAO notes that governance is inadequate as regards such things as the division of responsibilities between the Swedish Civil Contingencies Agency (MSB) and the Swedish Radiation Safety Authority (SSM).

This in turn leads to unclear conditions for the county administrative boards, which are to lead the state emergency services in the acute phase of a nuclear accident. The Swedish NAO therefore recommends that the Government clarify the division of responsibilities between the two agencies.

With regard to the management of a potential nuclear accident, the audit shows that the Government Offices has a crisis management organisation that allows for efficient handling.

“This is a marked improvement since the Swedish NAO’s audit of preparedness for nuclear accidents in 2007,” says Stefan Lundgren.

The audit also shows that supervision of the county administrative boards is not sufficiently extensive. This also applies to SSM’s supervision of physical protection, information security and personnel security at nuclear facilities, which in the worst case could lead to a deterioration of the ability to prevent and manage attacks against the facilities.

“We recommend that MSB strengthens its oversight of the county administrative boards and that SSM enhances oversight of physical protection, information security and personnel security,” says Sascha Sohlman.

The Swedish NAO further recommends that the Government gives MSB the primary responsibility for developing a national strategy for remediation after a nuclear accident, that MSB, SSM and the county administrative boards in the counties of Uppsala, Kalmar and Halland carry out regular joint remediation exercises, and that the Government ensures that there is a legal basis for the continued handling of iodine tablets. 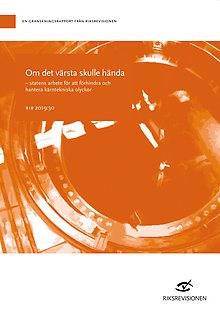 If the worst should happen – central government work to prevent and manage nuclear accidents (RiR 2019:30)