Almost 170,000 old-age pensioners and people on low incomes who are sick-listed or with disabilities are not receiving the housing supplement, despite being deemed eligible. On average this is a matter of about SEK 1,300 per month – money that could raise many above the poverty threshold.

The housing supplement is to contribute to a reasonable living and housing standard for older people and people on low incomes who are receiving sickness and activity compensation due to impaired work capacity.

Of those eligible for the benefit, almost a quarter of recipients of sickness and activity compensation and a third of old-age pensioners are not receiving the housing supplement, according to the Swedish NAO’s audit.

In 2016 the figures were about 40,000 recipients of sickness and activity compensation and 129,000 pensioners, who on average are entitled to SEK 1,300 per month. Of the individuals concerned, there are about double the number of women as men.

“The percentage of people with a low economic standard is very high in these groups, compared with the rest of the population. A housing supplement could raise many in this target group above the poverty threshold,”, says Auditor General Stefan Lundgren.

An application is required to receive the housing supplement. This in turn requires knowledge, understanding and facility.

“It is evident that many people who are eligible for the housing supplement do not apply. This may be because they do not know about or understand that they are entitled to the benefit. It may also be because the application procedure is too complicated,” says Tina Malmberg, project leader for the audit.

The housing supplement cost the State a total of about SEK 12.7 billion in 2016. The Swedish NAO’s calculations show that if everyone deemed eligible had also taken up the benefit, the cost would have increased by about SEK 3 billion.

“This would be a relevant measure to reduce financial vulnerability among old-age pensioners and people on sickness and activity compensation,” says Auditor General Stefan Lundgren.

The Swedish NAO recommends that the Government task the Social Insurance Agency, in the same way as the Pensions Agency, with regular estimation of the size of non-take-up of housing supplement – called hidden statistics – as well as reporting measures taken to reduce the risk of hidden statistics.

It is recommended that the Social Insurance Agency and the Pensions Agency collaborate on estimates of hidden statistics and take effective and targeted action to reach these groups.

The individual must apply personally for the housing supplement, and provide information on housing cost, income and savings. It makes no difference if the applicant owns or rents their home.

The size of the housing supplement granted depends on the housing cost, income and any assets. Rent or charges, mortgage interest expense, real estate charges and running costs, for example for heating, are counted as housing costs.

Non-take-up of a benefit by those who are eligible for it is referred to as hidden statistics. 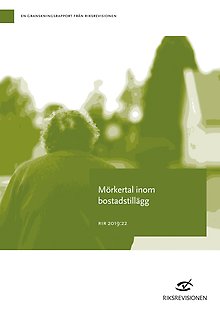