Different assessments of women and men on sick leave, despite the same work capacity

Women with mild or moderate mental ill health diagnoses are sicklisted 30 per cent more than men, despite being assessed as having the same level of disability and activity restriction. The Swedish National Audit Office’s audit shows that the sickness insurance system appears to be unable to achieve a consistent assessment of women and men.

Women and men must be treated equally in the sickness insurance system. Despite this, for a long period of time, women have been sicklisted to a considerably greater extent than men, and women’s sickness absence rate is currently almost twice as high as that of men.

The Swedish NAO’s audit shows that it is highly probable that a not inconsiderable part of the differences in sickness absence can be explained by women and men being assessed differently in the sicklisting process for certain diagnoses.

The conclusion is based on an audit of sicklisting of 60,000 individuals in the Skåne region from 2010 to 2016, where the majority had been diagnosed with mild or moderate mental ill health. The number of sicklisted persons with these diagnoses has increased and currently represents around 15 per cent of all ongoing sickness cases.

The audit shows that women with mild or moderate mental ill health diagnoses are sicklisted 30 per cent more than men, despite being assessed as having the same level of disability and activity restriction.

The difference does not appear to be explained by women having worse health than men, or that men and women often work in different professions and sectors. On the contrary, the results indicate that women have better health than men when the assessment of disability and activity restriction is taken into account.

“The results show that the differences in sickness absence in the case of mild or moderate mental ill health are partly because women and men are sicklisted to a different extent – even though their work capacity is deemed to be the same,” says Pathric Hägglund, project leader for the audit.

A likely explanation for the differences is that the uncertainty in the assessment of work capacity in these diagnoses is particularly large, since objective and measurable data are often lacking and the doctor's assessment is largely based on the patient’s own description of their ill health.

The audit does not report whether the differences are due to the fact that women are sicklisted more, or men less, than the sickness insurance regulations permit – both alternatives are possible, as well as a combination of the two.

“The audit shows that the sickness insurance system appears to be unable to achieve a consistent assessment of women and men. This affects people’s earned income, pension and, in the worst case, also their health. More initiatives should therefore be taken to reduce these differences,” says Auditor General Stefan Lundgren.

In order to reduce the uncertainty in assessment of patients’ work capacity, the Swedish NAO recommends that the Government tasks the Swedish Social Insurance Agency with a periodic follow-up of issuance of medical certificates for women and men at different health care providers.

The Swedish NAO also considers that the Government should appoint an inquiry to make proposals for how: 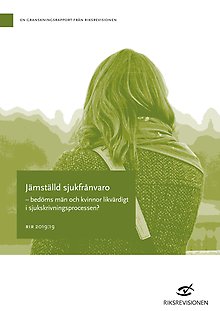