An IT system that no longer meets the requirements of the organisation for what it needs to perform is defined as obsolescent.

The Swedish NAO’s audit shows that a very large number of government agencies have obsolescent, business-critical IT systems.

“Our overall conclusion is that a number of government agencies have not done enough to deal with the problems related to obsolescent IT systems,” says Auditor General Stefan Lundgren.

This causes a number of problems. For example, around 80 per cent of the government agencies in the report state that they have difficulties in maintaining the necessary level of information security in one or several of their business-critical systems More than one in every ten agencies state that this applies to all, or a majority of their systems.

The Government’s objective is for Sweden to be the world leader at exploiting the potential of digitalisation. However, almost half of the agencies state that digitalisation efforts are considerably hindered by problems in their IT systems.

“Obsolescent systems often make it difficult, or even impossible, to develop new services or change the agency’s business processes. Because of this, the agency’s operational development is also slowed down,” says Marcus Pettersson, project leader for the audit.

The Government has taken some measures with regard to digitalisation, which indirectly may have had positive effects on the issue of obsolescent IT systems, but no measures have specifically targeted the problem.

The audit shows that the responsible ministries, and thus the Government, lack sufficient knowledge on both the incidence, and the consequences of obsolescent IT systems.

“Our assessment is that the Government should have done more to inform itself of the risks in this area and to rectify the situation,” says Auditor General Stefan Lundgren.

The Swedish National Audit Office recommends that the Government produce support that makes it easier for agencies to work efficiently on the problems related to obsolescent IT systems and further digitalisation.

The Government should also instruct a suitable actor to monitor and evaluate this area, in order to ensure that information concerning the conditions and situation of agencies is regularly collected.

Among other things, it is recommended that the agencies develop and use the tools needed to assess how IT support is to contribute to achieving the objectives of the core organisation and to regularly evaluate how it works. 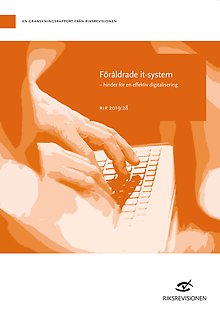 Obsolescent IT systems – an obstacle to effective digitalisation (RiR 2019:28)