Overcrowded accommodation, as defined in Sweden’s standard, has no negative impact on health or performance at school

An audit done by the Swedish National Audit Office shows there is no evidence that cramped living conditions increase the risk of ill health and poor performance at school, at least, not when the Swedish standard for overcrowded accommodation is used.

The number of people living in cramped conditions is gradually increasing in Sweden and this has led to fears that the spread of infection, disturbed sleep and an unsettled home environment will have a negative effect on health and performance at school. The situation is worst in Sweden’s large cities where more than one in four households can be defined as being overcrowded.

The Swedish National Audit Office has therefore examined whether the health of adults and children and children's performance at school have deteriorated after the rules regulating the right to housing allowance were changed in 1997. That change led to a relatively large number of households moving to smaller dwellings which were then overcrowded according to the Government’s most recent standard for overcrowded accommodation.

The Swedish National Audit Office has compared those people's consumption of care services, sick leave, temporary parental allowance and final grades from compulsory and upper secondary school with those of families who did not move to a smaller home.

"The audit shows that there are no signs that cramped living conditions, as defined in Sweden, have any effect on the health of adults or children, nor on children's performance at school," says Cecilia Enström Öst, project manager for the audit.

According to the standard used in Sweden, accommodation is not overcrowded when every person in the household has their own bedroom, apart from adult couples who can share a bedroom. The dwelling must also have a kitchen and a living room.

"The analysis of the audit also included a narrower definition of cramped living conditions, but even in those cases, neither health nor study results had been adversely affected," says Cecilia Enström Öst.

The Swedish National Audit Office states that it is questionable whether the overcrowded accommodation standard in its current form is relevant for today's housing market. The Planning and Building Act has been amended to allow for the construction of more small dwellings and the way Sweden’s welfare system relates to the overcrowded accommodation standard varies. Moreover, from an international perspective, it is common for children to share a bedroom without the family being considered to live in overcrowded conditions.

“We recommend that the Government reviews the design of the overcrowded accommodation standard and the way it is used. The questions that need to be asked are, for example, how much weight should be given to the standard in conjunction with the production of housing, and how should the standard be linked to the rules that regulate housing allowance and other supportive measures,” says Auditor General Stefan Lundgren.

The audit did not include “extremely overcrowded accommodation” where a bedroom is shared by more than two people. In Sweden, it is estimated that the percentage of the population living in extremely cramped conditions has doubled over the last 20 years, from 2.5 to 5 percent.

“It is reasonable to assume that living in extremely overcrowded accommodation may in some circumstances lead to the adverse effects that have been feared, but it has not been possible to investigate this within the scope of this audit. However, we are urging the Government to monitor this trend closely,” says Stefan Lundgren. 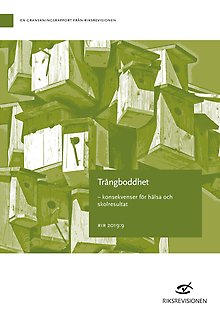 Overcrowded accommodation – consequences for health and performance at school (RiR 2019:9)