The work to protect consumers in the financial area is better today than in 2006 when the area was last audited by the Swedish National Audit Office (Swedish NAO). Nevertheless, consumers are still experiencing problems. The Swedish NAO is now recommending a number of measures to improve central government supervision.

Most adults in Sweden use financial services and products. But choosing between different types of savings, loans and insurance is often perceived as difficult, while the choices may have a major impact on the individual’s financial situation.

Therefore, in order to strengthen the consumer’s situation in the financial market, there are regulations stipulating how products may be marketed and that information must be fair and easy to understand. Ultimately, it is central government’s responsibility to ensure compliance with the regulations.

The Swedish NAO has examined whether central government supervision provides the conditions for a high level of consumer protection in the financial area. The audit shows that the conditions have improved since this area was last audited.

“The Government has become clearer in its governance and the responsible authorities have improved their processes. In addition, the worst problems in the premium pension system have been eradicated,” says Auditor General Stefan Lundgren.

Nevertheless, consumers are still experiencing a number of problems. For example, the Swedish Quality Index survey of the banking industry shows that customer satisfaction in 2017 had the third lowest score since measurements began in 1989.

“Effective supervisory work requires that consumer problems are identified and that the work focuses on the areas with the greatest problems. It is also key that the authorities have a clear division of responsibilities and that their cooperation works well,” says Per Franzén, project leader for the audit.

Based on the audit findings, the Swedish NAO has identified a number of areas where the work to promote good consumer protection needs to be further improved.

The Financial Supervisory Authority is recommended to increase analysis of the outcome and impact of its supervision.

The Swedish Financial Supervisory Authority and the Swedish Pensions Agency are recommended to work together in order to clarify their cooperation and the respective agency’s responsibilities.

Footnote: The report examines central government supervision related to regulations stipulating that consumers must be provided with the conditions to make informed decisions based on relevant and easy-to-understand information and that financial companies must show care for the consumer and base information on their needs and circumstances. Supervision related to financial stability, market abuse and money laundering is not examined in the report, although there are also consumer protection aspects in these areas. 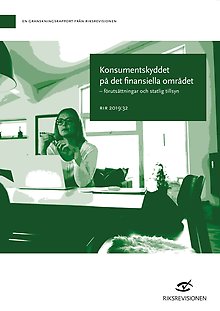