Deficiencies in planning of high-speed railways

To ensure that new infrastructure investments are cost effective, alternative and cheaper measures should be considered first. Planning of the high-speed railway has not followed that principle. The Swedish National Audit Office is now recommending that the Government should not take any new decisions until the planning has been properly carried out.

The investment in the high-speed rail link between Stockholm, Gothenburg and Malmö, if implemented, would be the largest modern time financial commitment by the Swedish State.

The Swedish NAO has therefore audited the planning of the initiative. The overall conclusion is that the planning process has a number of shortcomings.

“The main problem is that planning has been based on the solution rather than the problem. The Government has taken initiatives for the high-speed railway without the existence of supporting documentation in the form of choice of measure studies and comprehensive impact assessments,” says Auditor General Helena Lindberg.

All the problem descriptions have been general with no in-depth analysis.

Nor has there been sufficient testing in accordance with the ‘four-step’ principle, which means that it must be investigated whether other, less costly, measures could solve the problem at issue. Application of the four-step principle whenever a possible infrastructure project is to be assessed is supported by both the Riksdag and the Government.

In addition, no account has been taken of whether the investment is economically efficient and effective.

“Other investment projects in the national transport plan are generally economically profitable. The unprofitable high speed railway will thus risk out-competing a large number of projects that would provide more value for money,” says Ingemar Delveborn, project leader for the audit.

Moreover, the audit shows that cost estimates were for a long time of low quality, heavily underestimating the costs. From an estimate in 2003 of SEK 50 billion, the project’s expected costs have now grown to over SEK 250 billion.

“It was only in 2015, when planning had been in progress for about a decade, that a more qualified approach was taken to the total investment costs. What the final cost will be is still not known,” says Ingemar Delveborn.

“Overall, we note that over 10 years of planning did not lead to adequate decision-making data. Before any more decisions are taken, the Government should ensure that the Swedish Transport Administration reworks the planning correctly,” says Helena Lindberg. 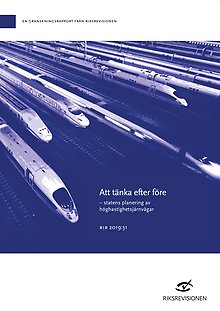