Unclear rules and insufficient supervision currently allow for great variation between and within municipalities when granting exemption from compulsory school attendance. The Swedish National Audit Office now proposes that the law be clarified.

All children who are registered residents of Sweden have a right to education, from the pre-school class until completion of compulsory school. This right is matched by an obligation to attend school, compulsory school attendance.

It is, however, possible to grant exemption from compulsory school attendance in Sweden, for example in connection with extended stays abroad or if there are exceptional reasons. The Swedish National Audit Office has audited the regulatory framework, the application of the rules and whether the municipalities receive the support that they need in order to interpret the law.

The audit shows that the regulatory framework is unclear and that municipalities and schools have difficulties in understanding how it is to be applied. One of the consequences is that there are differences between the municipalities in the way in which applications are granted with regard to ‘completing compulsory education in a way other than that prescribed in the Education Act’ – usually schooling abroad.

“The exercise of public authority must be equivalent throughout the country, but a number of different approaches apply in this area, some of which definitely do not comply with the legislators’ original intentions”, says Auditor General Helena Lindberg.

The situation is worsened by the fact that the National Agency for Education does not consider that it is able to produce any comprehensive, general advice to support municipalities and schools on these issues. In addition, the Swedish Schools Inspectorate undertakes no supervision with regard to ‘completing compulsory education in a way other than that prescribed in the Education Act’, despite the fact that, under the legislation, this agency is required to do so Nor is there any supervision of cases dealing with long-term leave of absence and when compulsory school attendance no longer applies, which, under the legislation, may be inspected..

The audit also shows that schools and municipalities are not able to impose sanctions in cases when a child fails to attend school, despite the rejection of an application for leave or for allowing the child to complete his or her compulsory education in a way other than that prescribed.

“The municipalities that we have spoken to say that the Act provides no tools to be used when a custodian allows unlawful absence. The Government should therefore consider whether some form of financial penalty (truancy penalty) could be introduced for non-compliance with compulsory school attendance”, says Sofia Sandgren Massih, project leader for the audit.

“There are such sanction options in, for example, Denmark and the UK. As we see it, they should only be used when the custodian deliberately fails to ensure compliance with compulsory school attendance, and not in cases of what is termed “the truancy problem”, says Sofia Sandgren Massih.

The Swedish NAO recommends that the Government initiates an amendment to the Education Act, to clarify which situations the various provisions apply to.

Such a review should take account of the length of leave a school principal may approve, whether an option for a truancy penalty should be introduced into the Education Act and whether the provision with regard to extended stays abroad should only apply to the children of public sector employees who are stationed abroad

It is recommended that the Swedish Schools Inspectorate carries out its assignment of exercising supervision over the municipalities’ work concerning consent for children completing their compulsory education in a way other than that prescribed in the Education Act and considers whether leave of absence and termination of compulsory school attendance because of an extended stay abroad should also be inspected in some way.

It is recommended that the National Agency for Education produces support and guidance to clarify what applies for leave, consent to complete compulsory education in a way other than that prescribed and when compulsory school attendance should cease to apply. 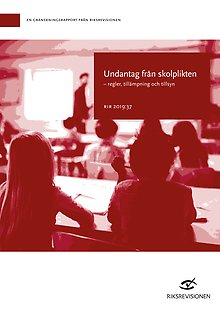