Svenska Skeppshypotekskassan was formed in 1929, with the task of lending money to shipping companies in order to strengthen the Swedish merchant fleet in the growing international competition after the First World War,

Its operations have not changed significantly since then and today it is the only remaining mortgage institution (hypotekskassa) within the central government sector, with equity of SEK 2 billion and lending of almost SEK 9 billion.

The Swedish NAO has examined whether Svenska Skeppshypotekskassan has an appropriate corporate form. The overall assessment is that this is not the case.

“Svenska Skeppshypotekskassan is neither a company, a government agency nor any other commonly occurring corporate form within the central government sector. The Government has limited insight into the operations and can only exercise control by appointing board members,” says Auditor General Stefan Lundgren.

The Riksdag has previously decided that central government activities must primarily be conducted by agencies, but that in some cases state-owned companies may be justified – especially in markets which are exposed to competition.

Overall, these constitute competitive advantages which may be a form of state aid not approved by the EU.

“The Swedish NAO does not take a standpoint on whether the competitive advantages constitute state aid, but notes that no reporting to the European Commission has occurred, despite the question having been raised several times,” says Gunilla Lundquist, project leader for the audit. 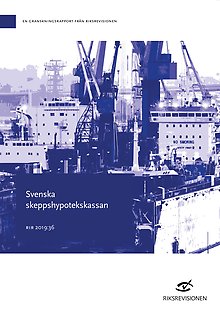