The electoral process can be improved, a new ballot paper system should be investigated

Sweden has a largely well-functioning system for general elections. However, the Swedish National Audit Office audit shows that some improvements could be made. In addition, the ballot paper system itself needs review.

General elections form the basis of democracy. They need to be carried out effectively in a way that inspires confidence. The Swedish NAO has therefore examined the work of the Government and the state electoral authorities and, in particular, focused on whether:

The Swedish NAO takes the view that the work carried out by the state electoral authorities in holding elections is largely well designed.

The secrecy of the ballot is deemed to be well protected by means of the new provision of the Elections Act stipulating that the place where ballot papers are set out must be screened off. At the same time, the screening off causes a number of problems in polling stations. According to the Swedish NAO, several of these problems are linked to the large quantity of ballot papers currently required to conduct general elections in Sweden.

“The screens have worked well to protect the secrecy of the ballot, but there are problems that entail the risk of a lower turnout in future elections. My assessment is that the ballot paper system should be reviewed,” says Auditor General Helena Lindberg.

The Swedish NAO also notes that there is room for improvement in terms of the accuracy of the preliminary election results.

“Above all, accuracy could be improved if more ballot papers were counted already on the election night. Then there would be less difference between preliminary and final election results,” says Hanna Brohmé, project leader of the audit.

Finally, the audit shows that the election results are ready within the time limits deemed reasonable by the Riksdag, even though the final counting of votes and recording of the results by the county administrative boards takes an increasingly long time. 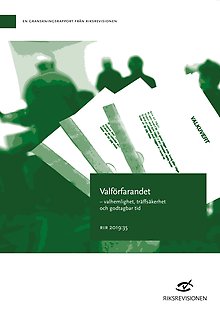 The electoral process – secrecy of the ballot, accuracy and acceptable time frame (RiR 2019:35)