Fiscal policy targets are achieved, but the Government should improve follow-up

The fiscal policy framework is to ensure long-term sustainable and transparent fiscal policy. The Swedish National Audit Office’s audit of this year’s fiscal policy bills shows that the Government adheres to the framework rules, but that follow-up and reporting to Parliament can be further improved.

The fiscal policy framework emerged after the economic crisis of the 1990s, which left large fiscal deficits and rapidly rising public debt in its wake.

Since then, the framework has played an important role and the Swedish NAO audits the Government’s application of the rules on fiscal policy targets, such as the surplus target, the expenditure ceiling and the new benchmark on public sector indebtedness.

This year’s audit concerns the 2019 Spring Fiscal Policy Bill and the 2020 Budget Bill. The overall conclusion is that the budget targets are achieved and the Government is in compliance with the framework. The requirements for transparent reporting are also essentially satisfied.

However, some parts can still be improved. Among other things, the follow-up of the surplus target would be strengthened if the Government explained more clearly the differences between its own forecasts and the forecasts produced by the expert agencies.

“In the absence of information as to why the government forecasts differ from those of the National Institute of Economic Research and the National Financial Management Authority, it will be impossible for external evaluators to assess the quality of the Government’s forecasts,” says Krister Jensevik, Project Leader for the Audit.

This is a shortcoming that has also been criticised in previous years. The Swedish NAO also notes that the Government’s proposal for a new expenditure ceiling for 2022 is not based on an account of how general government expenditure and the tax burden should be developed in the long term.

“The Government should explain more clearly its reasoning with regard to the level of new expenditure ceilings,” says Auditor General Stefan Lundgren. 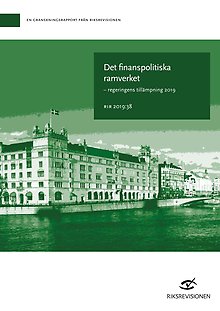