Successful free admission reform, but with a risk of negative consequences

Free admission to state museums has been efficiently and successfully implemented — despite unclear governance and objectives. However, the compensation for loss of admission fees does not always cover increased costs. The Swedish National Audit Office is now calling for measures to ensure that museums are able to perform their tasks even in the future.

At the beginning of 2016, the admission fees to 18 state museums were abolished. The aim was to increase the number of visitors and to attract new groups to the museums. The Swedish NAO’s audit shows that the Government prepared the reform well and that the museums broadly deal with the new situation effectively.

“The number of visitors has increased sharply. The reform has also facilitated the work of museums to reach new groups of visitors and to engage with other actors. At the same time, we see that certain museum agencies could work even more strategically with free admission to broaden their audience, say Lena Lakso, project leader of the audit.

The reform has changed the museums’ funding opportunities, as admission fees can no longer be collected. The SEK 80 million annual appropriation to compensate for the abolished admission fees has been allocated on the basis of previous years’ visitor statistics. Since then, the museums’ visitor numbers, and thus costs, for example for guides, security and cleaning services, have grown differently, while the compensation is still distributed in the same way.

Half of the museum agencies have requested extra budgetary resources to meet the increasing costs and some have given notice that there is a risk of strained finances in coming years.

“The Swedish NAO’s assessment is that in the long term, this implies the risk that museums will not be able to maintain a high standard and that, as a result, their relevance as knowledge and cultural institutions in the worst case could be reduced,”says Auditor General Helena Lindberg.

The audit also shows that the governance has failed in terms of the purpose and objectives of the reform. Budget bills, instructions and appropriation directions do not make it clear what the reform is expected to lead to.

“The fact that the purpose of the reform must be partially read between the lines has meant that the museums have interpreted it differently and therefore worked differently on their public and educational activities in order to reach what they perceive as the objectives of the reform, ” says Lena Lakso.

As far as evaluation is concerned, the Swedish NAO concludes that the statistics currently collected are not fit for purpose. The fact that the majority of the museums have so far failed to deliver visitor statistics of sufficient scope and quality to ensure that the reform can be followed up in a meaningful way supports this picture.

It is recommended that the museum agencies develop the work on free admission as a tool to reach new visitors. 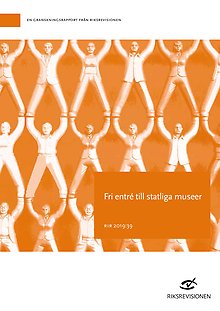