Major deficiencies in consumer protection for buyers of new apartments

Buyers of newly built tenant-owned apartments have far worse protection than consumers in other markets. The buyer’s position is weak, while there are significant risks. The Swedish National Audit Office (Swedish NAO) now calls on the Government to take the initiative to amend the Swedish Tenant Ownership Act.

The Swedish NAO’s audit shows that protection for buyers of newly built tenant-owned apartments has major, fundamental deficiencies compared to other markets. The Swedish NAO also notes that the Government has not done enough to address this.

“As consumers, we are used to certain fundamental rights. But when it comes to newly built tenant-owned apartments, the consumer is virtually unprotected. The Government should review the legislation so that the consumer is protected to the same extent as in other markets,” says Auditor General Helena Lindberg.

The problem is largely because the Tenant Ownership Act primarily regulates the relationship between the members of an existing tenant-owner association. But for new construction, the association (at the time the buyer signs the binding advance agreement) is indirectly managed by the company that is constructing the building, which makes the buyer’s position weak. This may have the following consequences for the buyer:

“After the consumer has signed a binding advance agreement, the association's construction board, appointed by the company that is constructing the building, can make decisions about changes in the design of the apartment, the association’s finances and other factors that are not in the interests of the future members,” says Johannes Österström, project leader for the audit.

Those affected have very little opportunity to demand redress, other than trying to revoke the advance agreement. This, in turn, may involve a lengthy legal process with the risk of large legal expenses.

The buyer’s position is further weakened by the fact that it is the construction board that engages parties with various information and control assignments during the process, such as estate agents, certifiers and inspectors.

“It is reasonable that the housing developer is responsible for delivering the product ordered by the buyer. At present, the rules make it possible to transfer both costs and the risk of errors and delays to the buyers,” says Johannes Österström.

The audit also shows that buyers take large personal financial risks without having the protection that is typical of other markets. A person who signs an advance agreement is committed for a very long time and bears the whole risk of a price drop – both for their existing dwelling and the future newly built apartment.

“In the worst case, a fall in prices in the housing market may lead to personal bankruptcy,” says Johannes Österström.

The Swedish NAO recommends that the Government review the provisions of the Tenant Ownership Act and other relevant regulations to ensure that buyers of newly built tenant-owned apartments are covered by fit-for-purpose consumer protection, in line with other consumer markets. The protection should mean that the construction company is responsible for delivery of the product to the buyer. 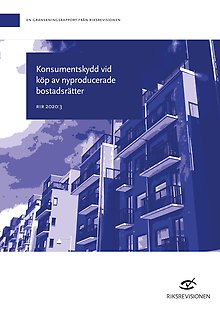