The RUT (household services) tax deduction has resulted in more work and higher incomes for some groups buying the services. Foreign-born people who started working in the RUT sector have increased their income and strengthened their position in the labour market. However, the Swedish National Audit Office notes that the Government’s assessment that the reform is self-financing has little empirical support.

The RUT deduction was introduced in 2007 and has several aims: to make undeclared work declarable, increase the labour supply of the purchasers and make it easier for people with a short education to enter the labour market.

The Swedish NAO’s audit shows that the objectives were met in part.

“The results must be interpreted with caution, since the causal relationship may be the opposite, that is to say that increased incomes made it possible to purchase RUT services,” says Anna Brink, project leader for the audit.

The Swedish NAO further notes that the RUT deduction lacks accuracy. The deduction was intended mainly to benefit households wishing to perform more paid work, but who had difficulty in finding time.

“It is above all for families with children that the purchase of RUT services can be assumed to lead to increased paid employment. However, the audit shows that only 31 per cent of households buying RUT services in 2017 had children at home,” says Anna Brink.

As regards the objective of reducing the thresholds to the labour market, the reform has had positive effects for foreign-born people. The foreign-born people who obtained jobs in the RUT sector had a weak attachment to the labour market before this employment. Both the income and the employment rate increased for this group, who were employed between 2011 and 2017, compared with those who did not work in the RUT sector. For Swedish-born people, the effects were limited and completely disappeared after a few years.

The audit also shows that a relatively high proportion of those who received jobs in the RUT sector are people who arrived in Sweden from other EU countries, probably to work in RUT services. The impact on public finances of this labour immigration is difficult to assess.

The Swedish NAO has also audited the Government’s assessment that the reform is self-financing in the long term. The audit shows that central assumptions lack empirical support. The Government overestimated the effect of transforming undeclared work into declared work and made overoptimistic assumptions as to how much more paid work the purchasers of RUT services would perform.

“Our assessment is that the positive impact on public finances of increased labour supply, job creation in the RUT sector and the reduction of undeclared work clearly fall below the cost of the RUT deduction. In addition, there is an additional negative effect on public finances of a reduction in households’ consumption of other goods and services when households spend more resources on RUT services,” says Auditor General Stefan Lundgren. 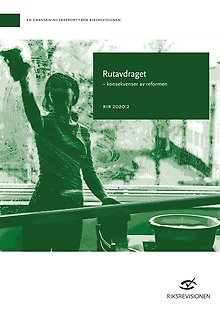 The RUT deduction for household services – consequences of the reform (RiR 2020:2)