The Swedish National Audit Office has audited the work of the State to get people who are not allowed to stay in Sweden to leave the country – voluntarily or through the use of coercive measures. The audit shows that it is not effective. The Government should therefore review the governance of these activities and the distribution of tasks between different government agencies.

Under the EU Return Directive, Sweden and other Member States should ensure that persons from countries outside the EU who are staying here illegally leave the country. This should preferably take place on a voluntary basis, but the Swedish Migration Agency, the Swedish Police Authority and the Swedish Prison and Probation Service may also use coercive measures if necessary.

The Swedish NAO’s audit shows that the three agencies’ aggregate costs for these activities increased by 40 per cent to almost SEK 2 billion per year in 2016-2018. The cost per departure has more than doubled during the same period from SEK 48,000 to SEK 97,000.

“The return activities achieve about the same results as in the 1990s, even though the society is increasingly allocating more resources to them. Although some of the increasing costs have natural explanations, it is not possible to draw any other conclusion than that there are major shortcomings in its effectiveness,” says Auditor General Helena Lindberg.

The Swedish NAO further notes that there are extensive weaknesses in governance and coordination of activities. Examples include:

“This is already a difficult task to begin with, and the organizational structure where return activities only represents a minor task for three large agencies, further complicates the governance. This leads to a risk that resources may not be efficiently distributed within or between agencies,” says Tommi Teljosuo, project leader of the audit.

The audit also shows that the necessary transfer of information between agencies can be slowed down by confidentiality rules and incompatible IT systems. Therefore, much is done manually, resulting in duplication of work, loss of information and outright errors.

“Following up cases, individuals, costs and results is a demanding task that at times can prove to be impossible. The fact that the activities have a significant impact on the lives of individuals and often take place under time pressure makes it even more urgent to deal with these problems,” says Tommi Teljosuo.

The Swedish NAO recommends the Government to review the mandates and the division of responsibility between the agencies, as well as consider changes to the organisational structure of the agencies in this area.

“Large parts of the problems identified relate to the division of activities among three different agencies. We believe it will be difficult to improve the effectiveness of the activities significantly with current roles and responsibilities between them,” says Auditor General Helena Lindberg. 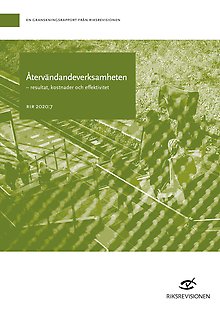