Uncertain route back to work after refused sickness benefit

The number of people who are refused sickness benefit has increased in recent years. Most return to their previous job, but often only part-time and many are again on sick leave after 9-15 months. The Swedish National Audit Office is now calling for measures to facilitate return to work.

From having been at a level of 1–2 per cent, the percentage of refusals of sickness benefit in ongoing cases of sickness has increased appreciably, and is now at 5–7 per cent.

The audit shows that nearly seven out of ten who have been refused sickness benefit choose to return to their previous job, even if they have been deemed to have reduced working capacity for that particular job. These people often reduce their working hours.

“A common type of case is a person who works 75 per cent and is on 25 per cent sick leave, and who after the refusal continues to work 75 per cent, but without sickness benefit for the other 25 per cent. This means that the job transition idea behind sickness insurance does not work in the way intended," says Daniel Melén, project leader for the audit.

The audit also shows that at a follow-up 9-15 months later, 29 per cent of those refused sick leave are, or have been, sick-listed again.

As a result of shortcomings in collaboration, jobseekers are sometimes not given enough information about the consequences that may result from registering with the Public Employment Service as a “jobseeker presently prevented from taking a job”.

“This means that the person is at risk of having their sickness benefit qualifying income (SGI) set to zero and thus not receiving future benefit from the social security system. In addition, these people receive no help in transitioning to a new job," says Daniel Melén.

The Swedish NAO has also investigated how five of the six largest state employers (Swedish Public Employment service, the Swedish Social Insurance Agency, the Swedish Prison and Probation Service, the Police Authority and the Swedish Tax Agency) comply with the legal provisions on preparing plans for return to work for all employees who are on sick leave for 60 days or longer.

The results show that in almost every third case there is no plan for a return to work. The greatest shortcomings are at the Swedish Social Insurance Agency, which lacks documentation in half of the cases reviewed. The Public Employment Service also largely lacks return to work plans.

“It is remarkable that these large central government employers are not better at establishing plans for return to work. They should reasonably lead by example,” says Auditor General Helena Lindberg.

The Swedish NAO recommends that the Social Insurance Agency provides information on coming refusals in good time and ensures that it has information on an employer’s measures at an early stage in the sickness case.

It is recommended that the Public Employment Service and the Social Insurance Agency review the form of meeting in connection with refused sickness benefit to ensure that those who are refused sickness benefit and register with the Public Employment Service understand the consequences of registering as a jobseeker presently prevented from taking a job.

Please see the report for the full recommendations. 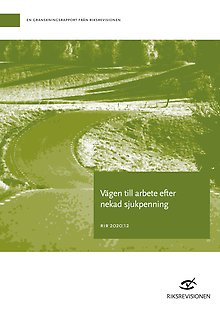 The route to work after refused sickness benefit (RiR 2020:12)