Lack of holistic approach to initiatives for socio-economically vulnerable areas

Over the years, the Government has introduced a large number of targeted government grants that are intended directly or indirectly to support socio-economically vulnerable areas. The Swedish National Audit Office’s audit shows that these should be designed more strategically so as to benefit the local public sector core activities.

The Swedish NAO has audited targeted government grants that in various ways are intended to support socio-economically vulnerable areas.

The audit shows that it is not certain that a government initiative really strengthens vulnerable areas, even when it amounts to several hundred million kronor. In many cases, in the end only a relatively small amount of money has reached the area, and often the problems are too great to be addressed by targeted government grants.

Skills supply within the social services and the police is an example of major challenges in many vulnerable areas that have been problematic to change with targeted government grants. Difficulties in recruiting and retaining staff is probably one main cause.

“If the support is to benefit the local public sector core activities – such as social services, schools or the police – its design needs to be more based on specific local needs. It also needs to be based more on a holistic perspective on the public commitment and how different government initiatives affect each other," says Auditor General Helena Lindberg.

The audit also shows that the analysis carried out before and after an initiative should be improved. By analysing in advance the expected outcomes of different initiatives in different areas the Government could improve the support. In the same way, the follow up needs to take into account how the initiatives are received in different areas.

“Socio-economic problems and segregation will not be solved by targeted measures in different silos. But in fact only quite small changes are needed to enable the Government’s initiatives to provide better support to the local areas," says Petra Jonvallen, project leader for the audit.

Please see the report for the full recommendations. 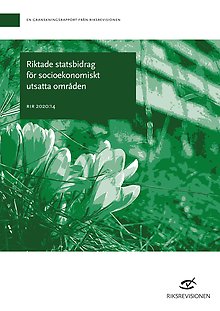