Swedish higher education institutions hold their own in a Nordic comparison

Swedish higher education institutions hold their own in a Nordic comparison. Despite this, the audit undertaken by the Swedish National Audit Office (Swedish NAO) shows that some of these institutions could produce considerably more teaching and research, without more resources.

“Despite the fact that higher education institutions in Sweden are comparatively efficient, several of them could increase their performance within teaching and research – without requiring more resources,” says Auditor General Helena Lindberg.

In its audit, the Swedish NAO has examined the possible causes of these differences in efficiency. The only factor that showed a correlation with efficiency in these analyses was high staff turnover.

“High staff turnover makes for extra costs in terms of recruitment, introduction and acclimatisation. There are probably also other factors that can explain the results”, says Christian Andersson, Project Leader for the audit.

The method used is the Data Envelopment Analysis (DEA), which provides a comparative measure of efficiency by relating the higher education institutions’ performance (credits achieved, number of PhD degrees and number of published research articles) with their resource investment (staff, students, doctoral students and office space). Of slightly more than 160 higher education institutions in the Nordic countries, 68 were included in the audit, 27 of them in Sweden. The audit studies the period 2011–2016.

The audit findings show that, on average, Swedish higher education institutions could increase their efficiency by seven per cent. Put very simply, the size of this potential for improvement may be equated with 12 000 annual performance equivalents (one annual performance equivalent corresponds to 60 higher education credits completed in a year). However, it is a matter of a combination of more students managing to obtain their degrees, more doctoral students achieving their doctorates and the production of more research. 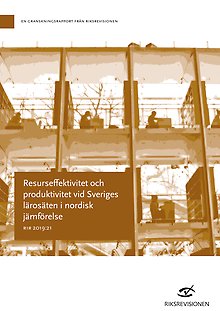