Extensive inefficiency at some prisons

Swedish correctional care is expensive in an international comparison, and the costs of institutional care have increased in recent years.

The Swedish NAO has therefore audited whether the Swedish Prison and Probation Service has organised the prisons and their operations so that they are effective and efficient. The audit, which was conducted using the Data Envelopment Analysis (DEA) method, shows that in 2018 the prisons could have increased their resource utilisation on average by 22 per cent.

“There are major differences between the different prisons. Nine have maximum resource utilisation, while the same number could be at least 40 per cent more effective. The others are somewhere in-between," says Fredrik Bonander, project leader for the audit.

One of the reasons is that Swedish prisons are often too small to be able to conduct economically rational activities of high quality. On average, the Swedish prisons have 95 places, while the audit indicates that a prison with approximately 300 places has the lowest cost per place.

“A rough estimate shows that a reorganisation of the country’s prisons into an optimal size would have a savings potential of approximately SEK 580 million per year. But then the costs that would follow from the actual reorganisation are not included,” says Auditor General Helena Lindberg.

One problem for some prisons is that the premises are not appropriate, because they were not originally built for correctional care. Lack of maintenance contributes further to inefficiency, as in several cases this has led to premises not being possible to use at all.

The fact that this has not been detected earlier is mainly due to the fact that the Swedish Prison and Probation Service does not collect the data required to make qualified comparisons between prisons.

“The financial monitoring of the Swedish Prison and Probation Service is unable to identify which prisons are inefficient. The Service needs to centralise and standardise the management of its statistics in order to gain access to comparative operational data," says Fredrik Bonander.

The Swedish NAO recommends in brief that the Swedish Prison and Probation Service: 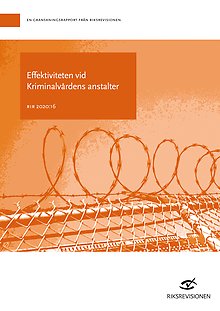