Considerable cost increases for operation and maintenance of railways

The State pays far more for operation and maintenance of railways than is initially agreed, shows a Swedish National Audit Office audit. Worst affected is winter maintenance, where the costs are almost doubled.

The Swedish Transport Administration is responsible for the operation and maintenance of 14,100 kilometres of public railways.

The cost of the basic maintenance contracts is about SEK 3.7 billion per year. The Swedish NAO’s audit shows that this is considerably more than the Transport Administration initially procured: Of 31 contracts examined, only in three cases were the costs the same, or lower, than the original tender.

– Our overall conclusion is that the Swedish Transport Administration’s procurements are not effective, and that consequently the State receives less maintenance for the money than would otherwise have been possible, says Auditor General Helena Lindberg.

There are several explanations. The audit shows for example that the cost deviations are greatest when:

As regards Winter maintenance, the cost deviations are greater when the same contractor is responsible for a contract area for two consecutive contract periods. This may be an indication of “unbalanced bidding”, when the contractor uses different pricing strategies to maximise compensation in relation to the amount of work done.

– We have clear indications of unbalanced bidding. However, deficiencies in the financial follow-up mean that it is impossible to determine whether, or to what extent, the cost increases are due to this, says Sherzod Yarmukhamedov, project leader for the audit.

– This complicates the Transport Administration’s work in several ways. Among other things, it is not possible to use inspection results to predict wear and tear on facilities and what maintenance will be needed, says Sherzod Yarmukhamedov.

The Swedish NAO recommends that the Government instruct the Transport Administration to analyse the scope and consequences of unbalanced bidding.

It is recommended that the Transport Administration:

See the summary for full recommendations. 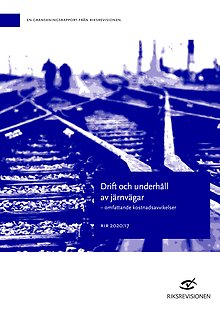