Central government invested a total of more than four billion kronor to improve the quality of municipal health and social care of the elderly. An important component was investment in various quality registers. They did not lead to any permanent quality improvement, but had positive side-effects for individuals, according to the Swedish National Audit Office’s audit (NAO).

The Swedish NAO’s audit shows that the Government did not achieve the main objective of the quality registers, which was to bring about systematic improvement that benefits all elderly people within elderly care. The investment in quality registers had some positive effects, but central government has not succeeded in managing these in the way that would have been necessary to improve the services in the long term.

“The Elderly Care Initiative contributed to a much-needed focus on working methods in elderly care. But the National Board of Health and Welfare should have been given clear instructions earlier to manage the effects. Then it would have been possible to develop long-term support for knowledge development in the municipalities while the initiative was ongoing," says Auditor General Helena Lindberg.

However, the Elderly Care Initiative had other positive effects than what was originally intended. For example, the introduction of quality registers has led to clear improvements in the health and social care of people living in special housing and registered in the quality registers.

“These persons get better health and social care in the municipality and this reduces their need for hospital care. They also have a clearly lower risk of inappropriate polypharmacy and fall injuries," says Henrik Segerpalm, project leader for the audit.

The Swedish NAO considers that this is due to the fact that staff at elderly housing facilities have used the quality registers as a basis for decision-making in day-to-day operations, which has thus benefited the persons who are registered.

However, this is not in compliance with the legislation that regulates the use of quality registers. In addition, it challenges the basic idea of equal health and social care services.

“The registers have had effects at the individual level that should have already been taken care of through keeping medical records. Record-keeping in municipal care services should therefore be improved so that the effects can benefit everyone,” says Henrik Segerpalm.

It is recommended that the Government:

It is recommended, among other things, that the National Board of Health and Welfare develops guidance for municipalities on how quality registers should be used in the work of improvement. 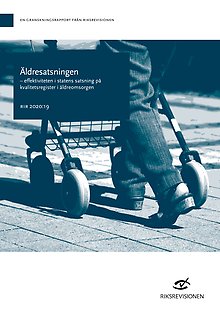